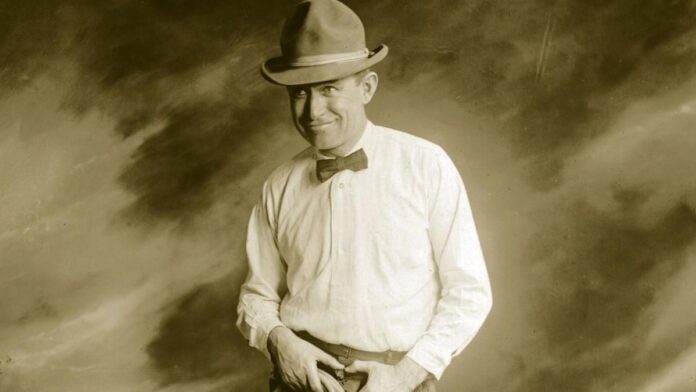 Who Was Will Rogers?

The American humorist, actor Will Rogers is an everlasting name in the humour world. He is still an instance for the new age humorists. Through his works, writings, movies, and Broadway work, keypad managed to gather millions of fans worldwide. The genius from Oklahoma was a born talent, and he justified his talents through his works. He was known as ‘Oklahoma’s favourite son’. He didn’t keep himself bound in the humour field only. Apart from being a renowned humorist, he was a famous actor and columnist also. He was one of the highest-paid movie stars of his time. An unfortunate plane crash took this huge personality away from us. ]

The supreme personality was born on 4th November 1879 in Oklahoma. His birthplace was known as the Cherokee Nation of the Indian territory at that time. His father was Clement Vann Rogers, and his mother was Mary America Schrimsher. He was of Cherokee ancestry. His early life was not so comfortable as he lost her mother when he was just eleven. Will was the youngest child of the eight children of his parents.

Unfortunately, only three of his siblings were alive when he turned into an adult. Will’s father was a former leader of the Cherokee nation and also was an attorney and a Cherokee judge in occupation. His father had high expectations from him, and Clement wanted Will to be more business-minded and successful. But in his childhood, Will was more like his mother than his harsh father. His nature led him to shift from one thing to another frequently. Although he overcame this nature in the later parts of his life.

He did his early schooling from the Willow Hassel School in Missouri. Later he completed his secondary education from the Kemper Military School of Boonville. He was a studious and good student and was passionate about his studies. Astonishingly he dropped out of his school after 10th. He always had an affection for the newspapers since his childhood, and that part helped him to be a columnist later.

His entire journey is full of ups and downs. He faced all kinds of good and bad experiences throughout life. He always was a daring person who took risks regarding his career frequently.

At the age of 22, being provoked by his friend, he left home with him. They moved towards Argentina to get a job as gauchos although they didn’t get their desired jobs and ran out of money. Later, Will got separated from his friend and moved to South Africa. Will also joined the British army for a short period.

His career as a showman began when he took the job as a trick roper in a South African circus. Later he moved to Australia to work in another famous circus.

After performing in the Australian circus, Will moved back to the US. 1905 was a remarkable year in Will’s career. In 1905, he started performing lasso acts and other tricks with rope in the vaudeville circuit. He’s charismatic, charming personality and his attractive skills gained huge popularity. Each show managed to get a huge crowd and an uncountable audience. His fame as a trick roper started increasing drastically. He managed to occupy space in the front pages of the newspapers, and that gave him more publicity. There was a time when Will constantly worked for 50 weeks at the vaudeville theatres.

His publicity and popularity secured a good space for him in Hollywood. He used his fame to put his very first step into Hollywood. He debuted in Hollywood in 1916 with the movie The Wall Street Girl. Famous producer-director Samuel Goldwyn offered him the lead role in the famous movie Laughing Bill Hyde. He also managed to gain enough fame on the Broadway platform. He also performed in the Ziegfeld Follies. His screen present used to provide amusements to his audience.

He started his acting career in the silent ages. He acted in 48 silent pictures, and all of those were hits. After that, the silent era ended, and sound came into movies. He rocked this version of movies too. The first sound film of his career was They Had to See Paris. Some of his famous sound films were- State Fair, Dr Bull, David Harum, Judge Priest, etc. His films inspired millions of his fans and people all over the world. In the later part of his life, he started his own production house, and he was equally successful as a producer too.

He was capable of writing mighty and influencing columns too. He gained huge popularity as a columnist too. The New York Times published his weekly column regularly from 1922 to 1935. He was a regular writer in the famous magazine The Saturday Evening Post. Roger started a weekly column himself named ‘Slipping The Lariat Over’, and this initiative gained him immense love from his fans. He also appeared in some radio broadcasts also. He published several books on wisecracks and touches of humour. His radio broadcasts also had millions of listeners from all over the world. The amazing man had spread his talents and his wisdom through all the platforms and enlightened the people in several ways.

The extremely talented person and one of the strongest voices of America died on 15th August 1935. He died in a plane crash near Point Barrow, Alaska. Millions of his fans and followers got shocked because of his sudden death.

Later, in 1991, a Broadway show commemorated the multi-talented humorist. The show highlighted his whole life and achievements in brief.

Such talent doesn’t come into the earth several times. Will’s whole life is full of risks and adventurous decisions. He never got stuck in one field and spread his talents in several different fields. To date, he is an instance for young humorists, comedians, and actors. The finest personality died in an unfortunate incident, but he is still influencing people all over the world through his works and life.

What To Know When You Are Going To Buy Sofa’s Cushion?

What Does React Native Developers Mean? And How It Will Beneficial To You

Influencer marketing has become big business over the last few years. Everyone from Walmart to Pepsi is getting in on the action.Though your mind...

Do you own an antenna TV?Many new smart TVs have built-in antennas for Bluetooth and WiFi functionality. However, these do not provide free-to-air channels....

Is Getting Solar Screens Worth the Cost?

8 Benefits of Investment for Your Retirement