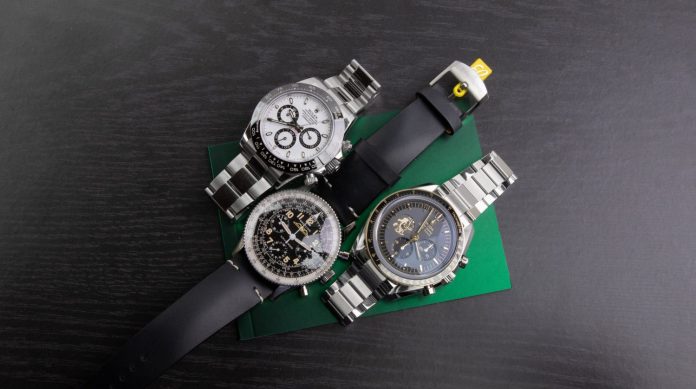 Unlike other investments, watches observe trends. They have mechanical movements of high value, although, to the common eye, it may seem like a mere accessory. While the patterns are cyclical in nature, you may not be looking forward to waiting for two decades before your style makes a fashionable comeback. Nonetheless, it is beautiful to love a timepiece that has the potential to increase its value.

There are models and brands that have proved useful with time, whether they are highly regarded for their sophisticated touch, superior mechanics, or both of these factors. Most of these legendary watches have been included in this article.

There have been multiple Reverso editions for both men and ladies since 1931. The peak of popularity for this iconic Art Deco timepiece was during the 1930s and 1940s. Jaeger-Lecoultre Reverso One was inspired by the original model designed for ladies back in the 1930s. Its casing is made of stainless steel with diamond rows at the top and bottom of the dial.

The model has a 36mm casing from stainless steel with a satin finish. Its bezel is yellow gold with also a satin polish. Fitted with automatic mechanical movement, Tudor Black Bay Black comes with a 38-hour reserve for power. It has a champagne dial and snowflake hands with a 12 o’clock logo.

Towards the end of the 20th century, Piaget Possession was one of the most collectible timepieces for women. These timepieces had natural stone dials. With a 22mm and 18 karats rose gold casing, the Piaget Possession featured a quartz movement. The bezel rotates and has 42 brightly-cut diamonds. The malachite dial on Piaget Possession goes with its green alligator band. There is a logo of the brand at 12 o’clock.

Jacqueline Kennedy Onassis is one of the famous personalities who has worn the Cartier Tank. This model is perhaps one of the legendary timepieces by Cartier. Throughout the last century, the Tank has experienced significant changes. Since 1922 during the making of the Tank Louis Cartier, there have been multiple editions in the robust principles of this iconic model. Cartier has several variations of such watches throughout the years for women and men.

In the past couple of years, Hermès has been performing exceptionally in the watchmaking business, specifically with their Slim d’Hermès design. The rose gold case of Slim d’Hermès L’Heure Impatiente is 40.5mm with a warm, lovely color. It is sleek and has a perfectly hugging case that fits the wrist flawlessly. The silvered multicolored dial has different textures, such as a sunburst touch on the outside ring.

These textures blend seamlessly with the graphic aspect of the standard numerals in the Slim line. They provide a good combination of impact and detail. These features support the value of the timepiece and

make it a valuable investment.

The Omega Seamaster Railmaster timepiece has the Co-Axial Master Chronometer Calibre 8806. The Swiss Federal Institute of Metrology has certified it with the best practices in the sector. This timepiece is waterproof as far as 150 meters and withstands magnetism of up to 15,000 gausses. It provides exceptional accuracy and performance. Its stainless-steel case of 40mm sets the vertically finished black dial. The watch is furnished in a complementary bracelet made of stainless steel.

There is a wave-edged and NAIAD LOCK design on the backside of the casing. The Omega Railmaster was originally introduced in 1957 and was made for railway personnel or people working in electrical fields. This watch has an appealing, practical, and simple design. It has been upgraded and enhanced to come up with a classic, modern Railmaster collection. You want this investment in such an iconic timepiece as it is likely to prove its worth even in the coming years.

Whenever there is a discussion regarding Rolex Cosmograph Daytona Ref 116500LN or Patek Philippe Ref 5711/1A, Audemars Piguet Royal Oak Jumbo Extra-Thin is often in the mix. It is arguably one of the top luxury sports timepieces worldwide. To appreciate this timepiece, you need to understand its history. During the early 1970s, the Swiss watch business was under a lot of pressure due to the Quartz Crisis. Most brands were on the verge of bankruptcy, while others completely shut their doors.

Audemars Piguet was one of the brands that required a miracle to survive the market. In 1972, it made the bold move of releasing the Royal Oak Jumbo Ref 5402ST. It set the bar for the reemergence of the high-end watches. It boosted the confidence of other brands to release similar models. Perhaps without the Royal Oak, models such as Vacheron Offshore and Patek Nautilus would not be in existence.

How Many Tablespoons In A Cup?

Know Some Facts About Neurosurgery Treatment

How to Claim for Your Unclaimed Property?

Solution to Orthotics and Prosthetics Prior Authorization through PriorAuth Online