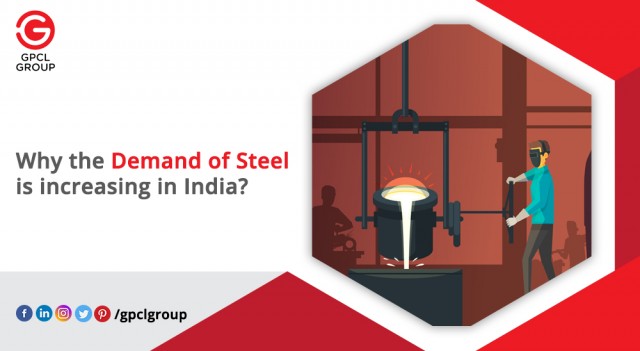 The world has been advancing really quickly in the field of technology and industry. An increasing number of buildings, infrastructure, and everything included and deemed necessary to push our lives into the world of technology have been quite speedy. Among the world, India has been one of the fastest growing countries in the world. In its way of going into the world and trying to keep up with the technological advancements, it has been increasingly demanding for a higher amount of steel in recent years. India has been on rising demand for steel for the past few years and we are here today to look at the reasons behind this.

What is Causing This Increasing Demand?

In the year 2018, India was the second largest producer of steel. This growing demand of steel in India has been mostly due to the increasing domestic availability of raw materials like effective labour and iron ore and as a result of this, the steel industry of India has been able to contribute a significant portion to India’s manufacturing output. Most of India’s manufacturing companies in India like Steel Casting Foundries are very modern with state-of-the-art steel mills located at many cities across the country. The steel industries of India have been trying to keep up with the modernisation by constantly upgrading the older plants for greater productivity and higher level efficiency of energy.

Other Factors Affecting The Demand For Steel

Various factors come into play when we look at the reasons behind the growth of the demand for steel in India. One of the major factors of this growth in demand is government initiatives. The Government of India has levied an export duty of 30 per cent on Iron Ore to ensure greater supply to the domestic steel industry. It has also focused on the infrastructure and has also restarted the road projects that have given a considerable push on the demand for steel. The slow but steady acceleration of the economy of the rural regions in India is also expected to provide growth in steel demand.

The growth of the construction industry due to rapid urbanisation is another factor that is increasing the demand for steel in India. Although for a couple of years, the construction Industry slowed down, they have again shown signs of development and thus boosting the demand for steel. The growth of the automobile industry is positive and more and more foreign manufacturers are putting up their plants in India and manufacturing the cars in India. It has also affected the demand for steel in the country, and the graph is rising. With the United States putting a specific embargo on China, the world is looking towards India for steel, and the demand is increasing both in domestic as well as global market.

Since the National Steel Policy (NSP) has been approved by the Government, it now seeks to a competitive market for the steel industries in India at a global level. All these various factors have given rise to increasing demand for steel and steel products and other materials in India.

Tips For Your Legal Consultation About Your Workplace Bullying

How To Choose Cosmetic Packaging: Beauty From The Outside To The Inside

When Is the Worst Time of Year to Sell a House?

How to Hire a Painter for Your Home: A Basic Guide

7 Common Mistakes That Can Hurt Your Work Injury Claim