Sushant Singh Rajput was a popular Indian actor, dancer, model, entrepreneur, and astrophysicist. He became popular in the entertainment industry once he made his debut role in TV serial Pavitra Rishta. Then, he got a chance to act in many movies like Kai Po Che!, Kedarnath, etc. But the shocking news is that the actor was no more, as he committed suicide on June 14 2020. It created panic and shock in the Bollywood industry, as no one expected this act.

Sushant was born on January 21, 1986. He was just 34 Year old at the time of death. Maldiha, a small village in Purnea District, Bihar is the birthplace of Sushant. His father’s name is Krishna Kumar Singh, and his mother’s name is Usha Singh. His father is a retired government officer. The actor lost his mother due to brain haemorrhage in 2002. This condition left the whole family devastated, and they all moved to Delhi from Bihar. The actor has four elder sisters, and one of his sisters named Mitu Singh is a state-level cricket player. The actor was much closer to his mother, and he couldn’t take that his mother was no more. To manage his feelings, he wrote poems for his mother. Before the actor’s death, he shared the photos of his mother on his social media account. He also shared some lines with his mother’s picture.

Sushant studied in St. Karen’s High School, Patna, and later moved to Hansraj Model School, Delhi. He was an intelligent student from his childhood days. After completing his school education, he got admission to do mechanical engineering at Delhi Technological University (DTU). But he didn’t complete his engineering, as he dropped out in the third year to show his talent in acting. As he was an intelligent student, he got AIR #7 in AIEEE 2003. He was well-known for winning the Physics National Olympiad. He almost cleared eleven engineering entrance exams, which shows his talent.

While pursuing an engineering degree at Delhi Technological University, the actor got an interest in dancing. So, he joined a dance group named Shiamak Davar. His family members were not happy with his decision to join the dance group. With his stunning dance performance, Shiamak decided to give him a chance to perform as a background dancer at the 51st Filmfare Awards in 2005. In the year 2006, he got another chance to dance with other members of his dance group at the Commonwealth Games ceremony.

One of his dancers in the group inspired him to join Barry John’s drama class, where he learned acting. Later on, Sushant moved to the city of Mumbai, where he joined Nadira Babbar’s Ekjute theatre group. He worked with this group for two years, and then, he got an opportunity to act in an advertisement, Nestle Munch. After this advertisement, he became a popular face.

Sushant acted in many Ekjute dramas. Balaji Telefilms liked one of his shows and asked him to attend the audition in 2008. He performed well in the audition and offered the role to act in TV series Kis Desh Mein Hai Meraa Dil. He stunned in the role of Preet Juneja and attracted many people of India with his role. In 2008-2009, he acted in this TV series. Then, in 2009-2011, he made his debut act in daily soap Pavitra Rishta as Manav Deshmukh. He delivered a romantic act in this TV series broadcasted in the Zee channel.

In 2013, he entered the Bollywood industry and made his debut in Kai Po Che! Movie. He played a lead role along with other actors Rajkumar Rao and Amit Sadh. The same year, he got a chance to act in the next movie Shuddh Desi Romance. He got a good chance to act with popular actresses Vani Kapoor and Parineethi Chopra.

In 2014, he played a minor role in the popular movie PK with other celebrities of Bollywood industry Aamir Khan and Anushka Sharma wife of Indian cricket team captain Virat Kohli. PK is one of the popular movies that collected huge money in theatres. He then performed a lead role in the movie Detective Byomkesh Bakshy, a mystery thriller.

In 2016, he noticed a good turn in his career with his acting in M.S. Dhoni: The Untold Story, a highest-grossing film in Bollywood. He acted in the lead role of Indian cricket player M.S. Dhoni.

In 2019, he appeared in Sonchiriya, an Abhishek Chaubey’s film. Bhumi Pednakar did the female lead role. In the same year, he appeared in Chhichhore with his co-artist Shraddha Kapoor. This movie’s message is to handle any difficult situation without thinking about the worst option ‘Suicide‘.

In 2020, he acted in Dil Bechara, the remake of The Fault in our stars. Due to the pandemic situation, this movie is yet to release in theatres.

Sushant dated his TV series Pavitra Rishta co-star Ankita Lokhande. The couple was dating for six years and broke up their relationship in 2016. The controversy was that Ankita slapped Sushant publicly when she noticed that he was dancing with other girls at the party. He was fully-drunk at the party, it seems. So, this controversy led to their breakup. According to some rumours, the couple married secretly in 2015. 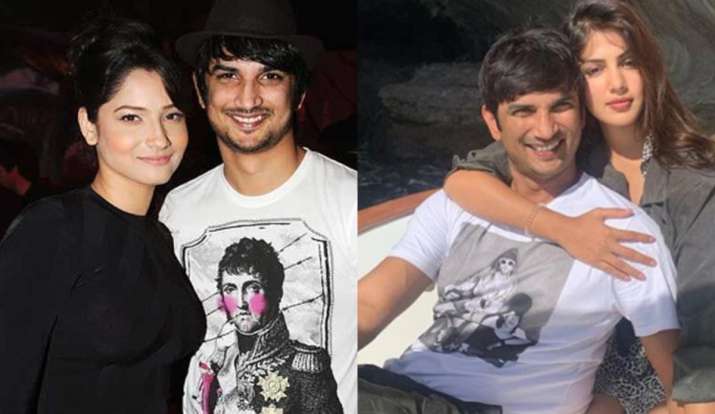 In 2014, the actor won Best Male Debut from Screen Awards for his role in Kia Po Che!. In 2017, Sushant won Best Actor Award for his stunning act in M.S Dhoni: The Untold Story. He won another award for the same film as the Best Actor from the Indian Film Festival of Melbourne.

Sushant Singh Rajput height is 5 feet 10 inches. His hair colour is black, and his eyes colour is dark brown.

Sushant Singh Rajput loved to buy cars and bikes. He owns Range Rover and Maserati Quattroporte cars. He loves to ride in his BMW bike.

Net Worth, Salary, and Income:

The actor was getting a good salary for his movies. He earns around 5 to 6 crore for one film. Sushant Singh Rajput net worth is $7.7 million as of June, 2020.

Sushant loves some of the food items such as Aloo Parathas, Rajma Chawal, Lobsters, Chicken, and Pani Puri. He used to drink tea with lots of sugar in it. His Favorited actors are Shah Rukh Khan, James Dean, and Daniel Day-Lewis. His favourite actresses are Tabu, Isha Sherwani, and Jennifer Lawrence. His favourite colour is black, and his favourite holiday destinations are New Zealand and Norway. He was an animal lover and used to post pictures on his Instagram account with dogs and cats.

Death Cause and Funeral

Sushant committed suicide in his apartment at Bandra, Mumbai. He was hanging himself in his room. According to the Police report, on Sunday at 9 AM, the actor called his sister and talked with her. Then, the actor had some juice and took his tablets for controlling depression. He went to his room and closed the door, and around 11.30 AM, the cook knocked on the door several times to confirm the lunch menu. Sushant was staying with a cook and two friends. So, his friends and a cook managed to open the door and found him hanging. Then, they called his sister and the police to the flat.

According to a report, the Bollywood actor Sushant Singh Rajput was fighting with depression and stress; it seems. He was taking treatment at Mumbai’s Hinduja Hospital to fight against his condition. The police are yet to investigate the doctor. But the post-mortem report confirmed his cause of death was suicide and asphyxia. His unexpected decision shocked the whole Bollywood industry, and the celebrities sent their condolences to his family members.

Everything to Know About Kojic Acid Benefits for Skin