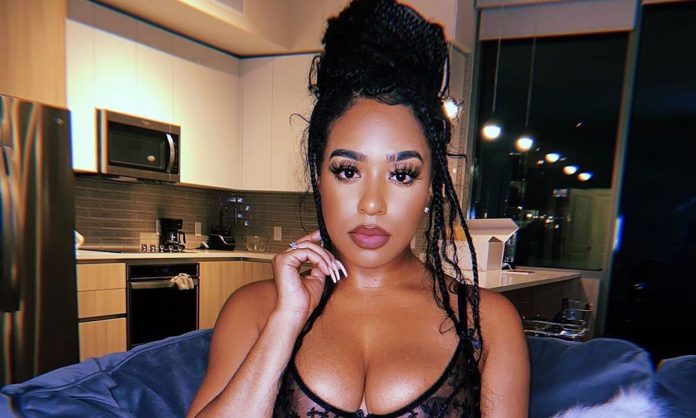 B. Simone is a famous media personality in America. She is well known as an actress, singer and social media influencer. Simone began to receive spotlight after her appearance in MTV show known as “Wild ‘N out”.

She has a huge fan base on Instagram 5.1m followers. All her fans admire and support her work. In the year 2014, she began her EP debut for “Lost Soul”. Since her debut, B. Simone is entertaining the audience. If you want to know more about B. Simone then, let us take a look at the facts about her life and career.

The interesting Life facts of B. Simone

Simone is a Texas girl. Her birthday is on April 5 1990. Her birth name is Braelyn Simone. The B. Simone is an American and her hometown is known as Dallas. She belongs to a simple family.

Mother of Simone is a homemaker and her father a church pastor. She spent her childhood with her sister named Jordyn. Since her childhood, B. Simone was keen about show business. Her talent in music made her to pursue singing in teen days. Her inspiration in the music field is DRake. In 2012, during her 20’s Simone auditioned for the popular “The search” series.

The professional life of B. Simone

The media career of B. Simone began to flourish after her performance in BET series. Primarily she was well-known as a comedian. She began hosting her first-ever comedy show named “106 & park” in 2012. Her professional life is spectacular as she made back to back debut in different fields in the show business.

In the year 2014, she made her debut as a singer for “Lost Soul”. The audience could see her acting talents in the film “About the Late Singer Life”. B. Simone received her first big breakthrough in media for “Wild ‘N Out “. This is the first time she got great recognition among the fans. After her success in various media programs, she launched her comedy series named “You’re my Boooyfriend”. She got the opportunity to play as a lead in DC young’s film named “Stac now Cry later”. B. Simone’s first-ever VH1 reality series was “Cruise Girl”.

After her presence in the VH1 series, everyone recognised her as a VH1 girl. Her success took another leap with her YouTube channel. She released a documentary on the platform which gave her more spotlight. The title of her first YouTube video is “B. Simone documentary”. Apart from her media presence, she has achieved so much in different fields. She is also a successful businesswoman. Her vegan free cosmetic product made her a philanthropist as well as a successful woman marketer.

From her professional information, it is clear that B. Simone is a versatile artist. She has many talents and skills that made her a successful artist.

Dating life of B. Simone

Simone began her relationship with Darian Barnes when doing the “You’re my Boooyfriend” series. Barnes is also an actor and model who dated Simone in 2019. Many people thought that Simone was dating DaBaby. A photo of them together got caught by the paparazzi. So the fans of the rapper DaBaby and Simone thought they were dating. As Simone also many times revealed about her crush on DaBaby nobody got surprised.

However, the relationship does not exist. DaBaby is just going to appear in one of the videos of “Wild ‘n Out”. The clip of the video released and many people got impressed with the romance between the two. Many people are saying that Simone and DaBaby are adorable together. The couple broke up during the same year. However, fans can only dream because they are not a couple.

Recently in the month of May, B. Simone released a book named “Baby Girl Manifest Life You Want”. Her fans could admire her writing skills through her inspiring book. In 2020, Simone made her appearance in several songs such as “The box”, “Million Dollar”, “Wet jewel” and “In my bag”.

The net worth of B. Simone

Simone is a successful independent woman who relies on her career for living expenditures. Her successful singing and acting career contribute more to her total net worth. It took her several decades of hard work to earn this fortune. As per sources, she leads a luxurious and comfortable lifestyle. Her total net worth for the year 2020 is $1.5 .

The body stature of B. Simone

Simone is a beautiful lady in her thirties. She maintains her beauty through regular exercise and fitness routine. Her accurate body measurements are 40-30-42.

She is 5 inches tall and weighs 60 kg. She follows a healthy lifestyle. The fans see the highlights of her fitness routine in social media pages. Her stunning brown complexion compliments her dark brown eyes.

Quick Facts About B. Simone Bio/Wiki

To conclude, B. Simone is an artist power-packed with talents. She is an independent woman who is a role model for other working women.

Study in the Best Physiotherapy College in Dehradun

Did the Hero aspirant Bakugo die? Are the rumors of Bakugo Death real?

Hybrid Systems Of Power Generation Are Proving To Be The Way...

6 Basic SEO Tips That All Businesses Should Be Following For...