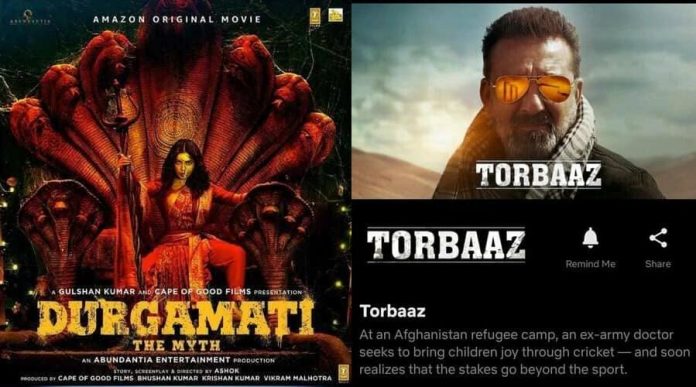 To begin with, at present OTT platforms are very famous. They are also the most desirable way of watching favorite shows and movies. Today there are plenty of OTT platforms. Some of the famous names in the list are prime, Hotstar, Netflix, and ZEE5.

In the coming days, these platforms are launching new and exciting movies and web series. Read through the article to learn about the best upcoming series and movies on OTT.

Upcoming movies and web series to release on OTT platforms

The first movie on the OTT platform to watch out for in December 2020 is the Durgamati. It is a horror-thriller movie that revolves around an innocent IAS officer. It is based on a Telugu movie Bhaagamathei.

Even more, in the movies, there is a spat between the director and the actor. So, the director kidnaps the actors’ daughter. Further, the movie will release on 11th December 2020 on prime.

The next movie to watch out on Netflix is The Prom. Even more, it is a treat for all fans of Meryl Streep, who love to enjoy her acting skills. Due to the COVID-19 pandemic, people have suffered a lot. We require good movies and shows to keep us happy.

The Prom has a storyline with a dual-layer. One part of the story focuses on the celebs that have come to the end of their fame. But the second part of the movie talks about a high school girl and her issues.

The next web series to watch out for on OTT platforms is Lahore Confidential. In the show, the story revolves around massive explosives. Even more, Lahore’s confidential main plot is the mission of the RAW agent. He has to cross the border and find a writer to know who is sponsoring the attack. It will release on 11th December 2020 and airing on ZEE5.

Prime is one of the popular OTT platforms for web series. One such show that is the most awaited on Amazon Prime is the wilds. It will be releasing on Amazon Prime on 11th November 2020. Apart from containing a plotline to thrill the audience, it is also fun to watch. The web series the wilds consist of teenage girls who are stranded on a remote island.

Yet another show to watch out for on OTT platforms is Black Widows. It is a story of three women in an abusive relationship. Further, these women are good friends, and they are fed up with their respective husbands. Later on, they make a plan of killing them all.

Further, the plot of the movie deals with one husband surviving the attack. Also, the surviving husband learns about women’s plans. Check out the rest of the story on ZEE5 from April of 2021.

OTT platforms such as Prime, Netflix, ZEE5, and ALTBalaji are very famous these days. These days some of the best movies and series are on OTT platforms. Here in the article, we have included the top five shows to watch out for in the coming days.

Home Loan Tax Rebate: Have You Claimed These Tax Benefits Yet?