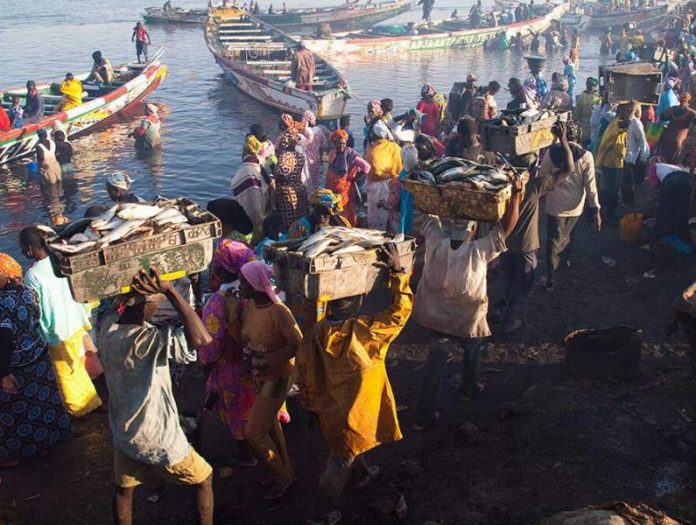 By: Gerelyn Terzo of Sharemoney

Senegal’s economy is ripe for transformation. With close to 50% of its population of nearly 16 million living in poverty, the West African nation is facing a host of challenges that — if overcome — could turn into stepping stones for a better future. In order for this to happen, however, it will take the Senegalese government doing a bunch of things right and the creation of many new jobs to give families a fighting chance.

This is easier said than done, with dangerous youth protests over economic inequality and the arrest of opposition leader Ousmane Sonko recently erupting that have thrown the nation into chaos. With an unemployment rate of 7.1%, Senegal’s chances for a turnaround could be worse, as it is one of Africa’s more stable economies, but could also be much better.

Senegal’s GDP expanded at a rate of 5.3% in 2019, before the pandemic hit, while last year’s lockdowns triggered a slowdown that targeted the country’s large informal economy, sending more households into poverty. Senegal’s economy shrunk by 0.7% in 2020. Economic recovery won’t happen overnight, but based on a recent case study by Brookings, it is achievable.

According to Brookings, Senegal holds great promise for economic expansion and the creation of new desperately needed jobs. These opportunities could be accelerated if the government would tweak policies to pave the way for greater investments into the private sector.

With the help of these tailwinds, Senegal could see growth in what Brookings calls industries without smokestacks, or IWOSS, which represent “emerging activities” such as “agro-industry and horticulture, tourism, some business services — including ICT-based services — and transport and logistics.” A more specific breakdown includes the following sectors:

These sectors are in the spotlight because they carry with them a higher demand for productivity jobs vs. other segments of the economy that are contributing to Senegal’s GDP, including manufacturing. In addition, IWOSS jobs are said to capture a significant share of workers fleeing the agricultural industry.

If Senegal experiences greater growth in these key sectors, it would likely not only lead to more jobs but higher-quality jobs that require higher skill sets, though IWOSS jobs can attract a mix of an unskilled or moderately skilled workforce from sectors such as agriculture. Senegal’s population is lacking when it comes to skill sets, including in the area of digital, which must be fixed in order for it to reach its full potential.

With the right government policies in place targeting the right sectors, Senegal could experience the creation of nearly 11 million new jobs by 2035. Among them, approximately two-thirds, or close to 7.5 millions of the jobs, could be deemed “higher productivity” under the IWOSS umbrella. The policies that would require changes surround the following: 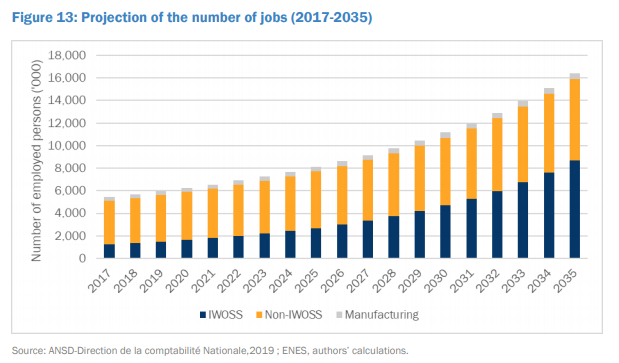 Tourism, in particular, could be a major boon for Senegal in a post-pandemic world if the country can capture the momentum that countries in Southern and East Africa are already experiencing, according to Brookings. Tourism has historically proven to fuel economic growth and globally is responsible for hundreds of millions of jobs with a total contribution of 10% to the world’s GDP. Senegal has yet to capitalize on its beautiful beaches to catapult its languishing tourism sector.

By some measures, Senegal appears to be on the right track, with the employment annual growth rate for jobs in IWOSS sectors rising 4.5% in the 16 years leading up to 2017. By way of comparison, non-IWOSS jobs in the country grew by less than 3% in the same period.

While Senegal’s economy was growing prior to the pandemic, the growth still did not add enough solid jobs. It comes down to a supply/demand dynamic, where the number of available workers is outpacing the number of available good jobs. According to Brookings, Senegal’s labor force expanded by nearly 2.4 million people in absolute terms between 2001 and 2017, which translates to an annual growth rate of 3.41%. Most of the jobs that are being created are low-quality in nature, with only 10% of jobs in 2019 offering social, retirement and healthcare benefits.

And when there are jobs, sometimes the employers don’t play fair. According to BBC Africa, a 33-year-old jobseeker by the name of Liliane Coulibaly Caly interviewed for a job at a large local company but got turned down due to her hair. In response, she launched her own small business, Akoya Hair, to help women accept themselves for who they are. The salon uses natural hair products that are made locally, and the sale of these products is what kept her business from going under during the pandemic.

Meanwhile, Senegal’s migrant community is another segment of the economy that was hit hard by the pandemic. The Salesian International Volunteering for Development (VIS) has launched the UNO project, which is designed to help migrants launch their own businesses in their home country and give them a financial future.

The Mission Newswire featured Senegalese worker Elhadi Ndiaye, who found himself an undocumented migrant due to an expired residence permit after nearly 20 years living and working as a migrant in Italy, where there are nearly 600,000 Senegalese living, close to 40% of whom are considered “inactive or unemployed,” according to the Mission Newswire. After losing his permit, Ndiaye was unable to provide for his family back home. Thanks to the UNO project, however, Ndiaye was able to relocate to Senegal on a permanent basis and start his own sheep breeding business.

Senegal’s economy is projected to grow by 5.1% in 2021 and 6% next year, though it hinges on the trajectory of the pandemic, according to the African Development Bank Group. If the Senegalese government can remove some of the hurdles to job growth, the future is looking bright. Brookings predicts that IWOSS jobs will grow by more than tenfold for the 2017-2035 period, which would represent nearly 53% of the country’s total employment pie. This growth in IWOSS jobs will be led by horticulture at 19% per annum, agro-processing at 10.1%, tourism at 7.6%, information and communications technology (ICT) at 12.1%, transport at 13.6% and finance at 15.5%.

The Top 6 Application Areas of 3D Printing in 2021

10 Tips to Get Success in Student Life

3 Break Accessories That You Can Buy from the Online Stores