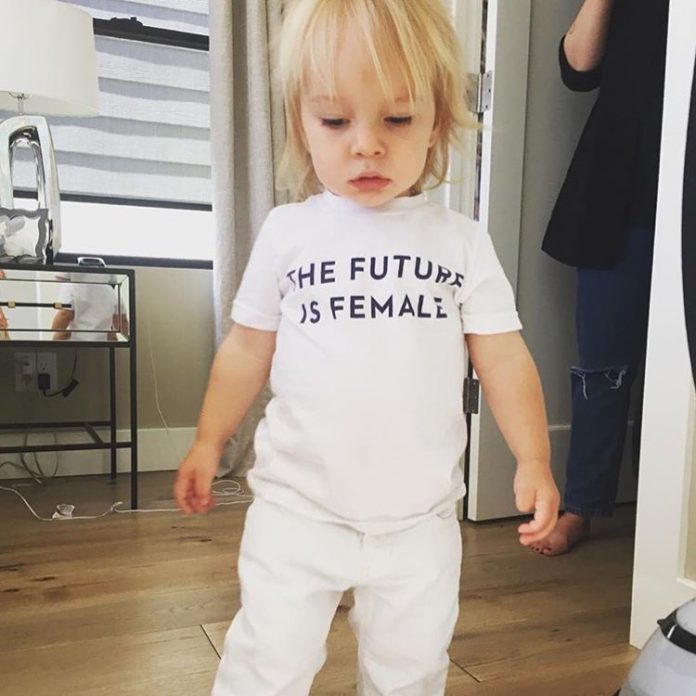 Cassius Riley is the son of Domino Kirke and Morgan O’Kane. His mother is a singer and his father is a musician. They are not together now. But being the son of famous people has its perks. Some cute photos of Riley are available in his mother’s Instagram account. He seems happy and his mother and father dote on him. Although not much information is about him we have gathered some details that will interest you. Know about all the information here.

Cassius is at the moment ten years old. His mother gave birth to him in 2009. He is living with his mother and her husband Penn Badgley. His biological father is Morgan O’Kane. His name is a Latin word meaning empty. He belongs to American nationality and Iraqi-Jewish from his mother’s side. He also meets his father and his mother allows him to spend time with him. His stepfather loves his mother as he always posts sweet messages for her on Instagram. This shows that he is living with a happy family and he is quite content in living with his stepfather. He is getting all the love in the world. Cassius is going to have a sibling.

Information about his Mother : Domino Kirke

Domino Kirke is a British American singer and she is both English and Iraqi-Jewish. She got the name after Domino Harvey because her mother met Harvey at her young age. Kirke’s family comes from the landed gentry of Nottinghamshire. Her grandmother was from Israel. She got spotted when she was singing in a pub and later signed with Fun Machine label. Then she joined with Jordan Galland and created a band named band DOMINO. She became popular for the Half-blood music video. Now she is thirty-six years old.

Now she is in a relationship with Penn Badgley after divorcing Morgan O’Kane. She got married to him in February 2017 in New York. In February 2020 she announced that she and Badgley are expecting their child after two miscarriages. So the couple is really happy about it. She posted a picture of her baby bump in Instagram with a heartfelt caption. She shared that she stopped trusting in her body after two miscarriages however now she is happy. But at first, she was not aware of the mysteries of pregnancy. As she is part of a community she knows many things and looking forward to giving birth to her baby.

Domino is also serving as a doula. She is the co-founder of the business Carriage House Birth. As she suffered two miscarriages she wants to help the women who are pregnant. She assists them during their pregnancy and offers tips to manage with it. She is also providing emotional support to women who have suffered miscarriages to go through the ordeal. Domino is a really kind and compassionate woman. She is a good mother to Cassius and helping him also to be considerate towards people. Now he is going to have a sibling to play with.

Information about his stepfather : Morgan O’Kane

Penn Dayton Badgley is the stepfather of Cassius. He is an actor as well as a musician. He got a lot of recognition for the role he played in CW’s Gossip Girl series. Now he is acting in YOU a thriller series on Netflix. He has also acted in many films such as The Stepfather, Easy A and John Tucker Must Die. He is thirty-three years old now. His place of birth is Baltimore, Maryland.

Badgley got married to Domino Kirke in 2014 at Brooklyn courthouse. Before her, he was in a relationship with his Gossip Girl co-star Blake Lively. He became the stepfather of her son Cassius after the marriage. Now he is going to have a son with Domino after two miscarriages. He is really proud of his wife’s accomplishments. He also looks after Cassius as his own son. This shows that he is an understanding stepfather. The couple post lot of pictures of each other in their Instagram account. Their relationship is very strong. Now they are going to start a new chapter in their life.

Recently, Badgley posted a sweet message to his wife on her birthday. He described her as a radiant soul and an honest woman. He also admires her helping nature and likes when she is happy. He is also glad that he got married to her.

The net worth of Cassius Riley

As Cassius Riley is a young boy he still has a lot of time to earn money. The net worth estimate of his stepfather is $8 million. These are the hard-earned money from his acting career. His net worth may increase in the future as he is a part of the famous Netflix series YOU. His mother is also working as a doula and is part of the pregnant woman community.

Cassius Riley is growing up in a loving household. We do not know what career he will choose between singing and acting. However, his mother and father will support him always.

3 Benefits of Selling a House to a Cash Buyer

Modern human society can often feel disconnected from nature. The offices, automobiles, roadways, and houses that people spend the majority of their time in...