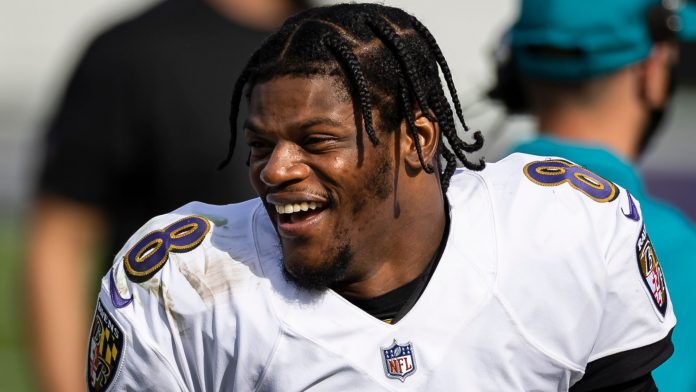 Lamar Jackson is a popular football player. He is one of the most valuable players of the NFL. Now the player was seen with his new girlfriend Jaime Taylor. Many of the gossip columns are trying hard to find many details about her however she keeps a low profile. Although it is too soon for the NFL player to marry he is having a great time with his beautiful girlfriend. They both are looking happy and comfortable in the photos. Know all the details about the couple here.

Where did Jackson meet Taylor?

Lamar Jackson was able to hone his football skills when he played for Boynton Beach High School. This allowed him to get invitations from a lot of Universities. He opted to join the University of Louisville where he spent four years of his life. He got training from the head coach of the university Bobby Petrino. Along with his football career, he was also able to become successful in his personal life because of the University. He met his girlfriend Jaime Taylor in this university only. They both knew each other in the freshman year however they started to date in the junior year. But Taylor unlike her popular boyfriend always kept away from the spotlight. Even after becoming the girlfriend of the famous NFL player, she is able to keep her life private from prying eyes.

Jackson is head over heels in love with his girlfriend. In a small interview, Taylor shared that she used to get angry when she saw any negative news about her boyfriend. But Jackson always tells her to ignore the negativity. This is the attitude followed by the player because he never permits the bad things to get to him. He responds to the news with his talents in the game and never tries to answer the critics.

Jackson is serving as the quarterback for Baltimore Ravens in the National Football League. His birth date is January 7, 1997, and his place of birth is Pompano Beach, Florida. Although he was from a humble background he tried to do best in the sports field. When he turned eight he was able to hit the ball twenty yards and in his high school years, he was able to throw a hundred yards. He is a talented player winning awards such as Maxwell Award, Walter Camp Award, and Heisman Trophy.

The players’ height is 6 ft 2 in and his weight is 96 kg. Now he is one of the best players of the NFL. Many people consider him as an inspiring icon in African American culture. He gets the description as “unapologetically young, gifted & Black”.

Jackson is also famous in popular culture. He made his appearance in ABC’s Celebrity Family Feud along with former NFL players and his colleagues. He also exhibited his athletic prowess in the commercials of GEICO and Pizza Hut in 2019. Moreover, the NFL calls him the fastest player in the games.

In 2019 the sportswear retailer Cyber Monday shared that the sportswear endorsed by Jackson called Fanatics sold more products than the rest. Pope Francis also received the gift of Lamar Jackson Ravens jersey. In the same year, Al Pacino praised Jackson because of his inspiring personality and attitude.

Jackson resides in Owings Mills, Maryland along with his mother and sisters. He is a Christian by religion. He always eats shrimp alfredo pasta before his games. The player’s favourite hero is Superman.

He began his sportswear line called Era 8 Apparel in 2018. Major sports apparel brands are waiting to strike up a deal with him but he has not talked with any of them till now. In 2020 he signed a solid contract with Oakley, Inc. a company that creates sports goggles, sunglasses and helmets.

Know about the girlfriend of Lamar Jackson

Although Jackson has contributed his talents to a lot of NFL games and is a renowned player, he knows how to keep his life private. The relationship he has with his girlfriend is what is between him and her. But on Halloween 2019 he spoke about his girlfriend for the first time. They were wearing Harry Potter themed costumes. Jackson was noticeably dressed as the Dark Lord. He shared that Jaime gave the idea for the theme. So Jaime may be a potter head and a great fan of the magical series. On the other hand, Jackson has never seen the film or read the book. He usually tries to watch it whenever he gets time from his busy schedule however he sleeps in the middle. He also thinks that it is very long for his taste.

Lamar Jackson and Jaime Taylor are couple goals. They know what is important in their relationship and trying to keep it strong after all these years. Jackson also never makes his fame go over his head. He is a grounded and hardworking guy. Moreover, Taylor is doing all she can to support him.

What Is The Most Accurate Translator App?

Why And How To Choose A Professional Locksmith?

How Often Should You Cut Your Grass?

Model Kamal Cheema Speaks About How She Got A Break, Spills...

6 Undeniable Reasons to Buy a Condo and Make It Your...