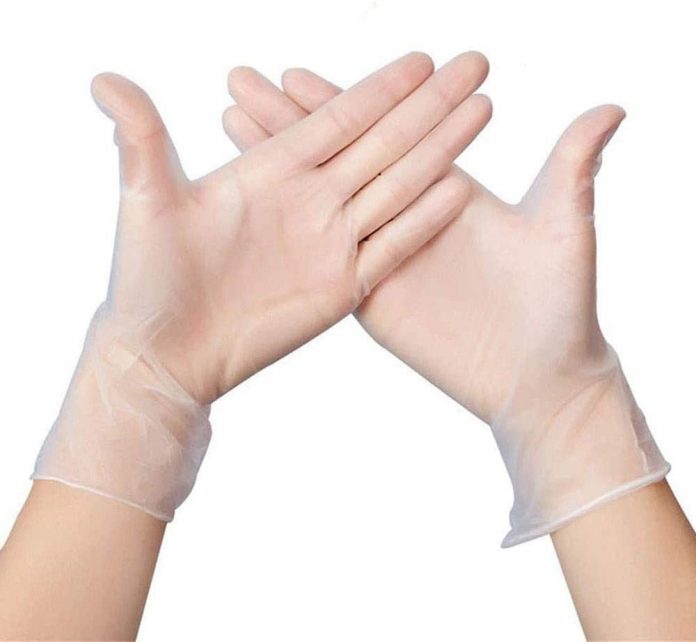 Vinyl gloves are a form of disposable gloves, therefore indicating that they are not to be reused. Whether or not gloves are reusable depends on factors of glove-sensitivity and material thickness. The less sensitive and the thicker a pair of gloves happens to be, the more often they can be worn. Since vinyl is so thin, these gloves are best worn during food preparation and in the medical setting, as the thinness allows gloves to be removed and replaced, quickly.

In general, gloves in high-risk settings are worn for purposes of avoiding cross-contamination. Preventing the spread of disease, avoiding contact with chemicals, and maintaining sanitation by minimizing the spread of germs, are all accomplished by wearing disposable, vinyl gloves. Despite the fact that it is strongly discouraged, sometimes, professionals will wash their gloves, then turn them inside out to be worn again. This only moves the germs on the outside of the gloves onto the wearer’s hands, thus contributing to contamination. Additionally, because these gloves are so thin, they easily tear apart, exposing the wearer to harmful elements in this way as well. Even during this current pandemic, experts still recommend hand washing over wearing gloves because of their ability to transfer the virus from surface to surface, and to you, should you accidentally touch your face. For all these reasons, reusing vinyl gloves is not recommended.  Click here to stock up on quality vinyl glove while you still can.

The Exceptions to the Rule

In dire cases, professionals are left with no other option but to reuse their vinyl gloves. In these cases, reusing vinyl gloves becomes a necessity, so it is acceptable, as long as the proper preparations have taken place. Though it is very tricky not to tear the gloves in the process, it is possible to minimize the spread of contaminants by removing gloves backward for each finger. Once the gloves are taken off, sterilize them and wash your hands before putting them on again. Another option for safer removal is to double up on the number of gloves that are worn at one time. For example, if you wear two pairs of gloves, you can remove the top pair of gloves by carefully folding them over, so that they do not touch the gloves underneath. Obviously, neither of these options is contamination-free, so avoiding reuse altogether is truly the best choice.

Disposable gloves are best used for quick tasks when workers are rapidly switching between what they make contact with. In most fields, this is a process that repeats over and over, making the need to switch out pairs an important part of the job. For extended wear, stick to reusable gloves, as they offer more durability for tasks like cleaning and washing dishes. The convenience of disposable gloves makes it easier for professionals in high-risk environments to dispose of their used gloves while keeping up with their tasks. Since they are tossed out, they do not need to be cleaned after being used, and their thinness allows for firmer gripping when handling delicate materials. Being able to maintain a firm grip when wearing gloves is important for essential workers who frequently handle delicate materials.  You can shop here for the most resistant disposable gloves.

Why Not Use Rubber Gloves Then?

You might be wondering why rubber gloves aren’t a common alternative to vinyl, given that supplies are low and maintaining a strong grip is so important. While it is true that rubber gloves can be washed and reused, in high-risk and fast-paced environments, workers still need to be able to switch between pairs quickly. Rubber gloves are typically very difficult to take off and they also take time to wash in-between uses. Time is a valuable asset in these industries and even though rubber gloves do allow for a firmer grip, the grip is not as strong as it is when wearing vinyl gloves because rubber material is thicker than vinyl. The amount of time it takes to wash rubber gloves in between uses would likely present a series of consequences during a medical emergency, brought on by the delay. Timing delays could also present problems for other time-sensitive situations, such as for those who work with chemicals like craftsmen and metalworkers.

If you find yourself in a desperate situation and have no choice but to reuse your vinyl gloves, research prompted by the effects of the pandemic has confirmed that certain sanitation methods work better than others when it comes to reusing disposable gloves. Soaps that contain chlorhexidine and povidone-iodine are most effective at removing harmful bacteria. Alcoholic-based chlorhexidine was also found to be a strong disinfectant for contaminants on disposable gloves. These solution washes allow for gloves to be worn nine to ten times in a row before being thrown out.

The Verdict is Vinyl

Even though these recently discovered solutions have been tested and proven to kill off harmful microorganisms effectively, alcoholic-based solutions also cause vinyl gloves to dissolve. Despite having proper sanitation in-tact, implementing these methods is a catch-22. These findings render that once again disposing of vinyl or other disposable material gloves after every use is the best option to avoid contamination and the spread of harmful elements. Sorry, Charlie.

With the Coronavirus infecting people with both illness and a sense of urgency, there has been increased leniency in the medical setting, particularly, surrounding the idea of reusing disposable, vinyl gloves. Before the epidemic, any medical staff member would  tell you that the golden rule was to never, ever reuse a pair of disposable gloves. Today, it is evident that times have changed. The wiggle room allotted towards glove re-wearing (no pun intended), does not come without fair warning. It is still significantly safer to change pairs as needed than it is to wash and reuse the same pair of gloves over again. Even though this is common knowledge, with glove supplies low and emergencies on the rise, gloves and everything else are being turned inside out.

Surrogacy Agency in Ukraine: The Best Services at World Center of Baby

The Convenience of GogoPDF: Why Merge Your PDFs Using its Function?

Why Choose Bathtub Repair Over Replacement?

7 Steps to Take If Your Roof Has Storm Damage