Mia Khalifa is a former ad^lt star and popular social media person. From the year 2014 to 2015, she established her name in the ad^lt film industry. She gained overnight popularity from her first appearance on the P⭐rn Hub website and was also ranked as number one p⭐rn star. She has made many controversial ad^lt films that made her even more popular. There is a huge fan base for her, and she was the most searched ad^lt star in 2016. Mia Khalifa was born in Lebanon, and she is also known as Mia Callista. She was often seen wearing a hijab on some of her films, but her family practiced catholic religion. However, she no longer practices the religion. 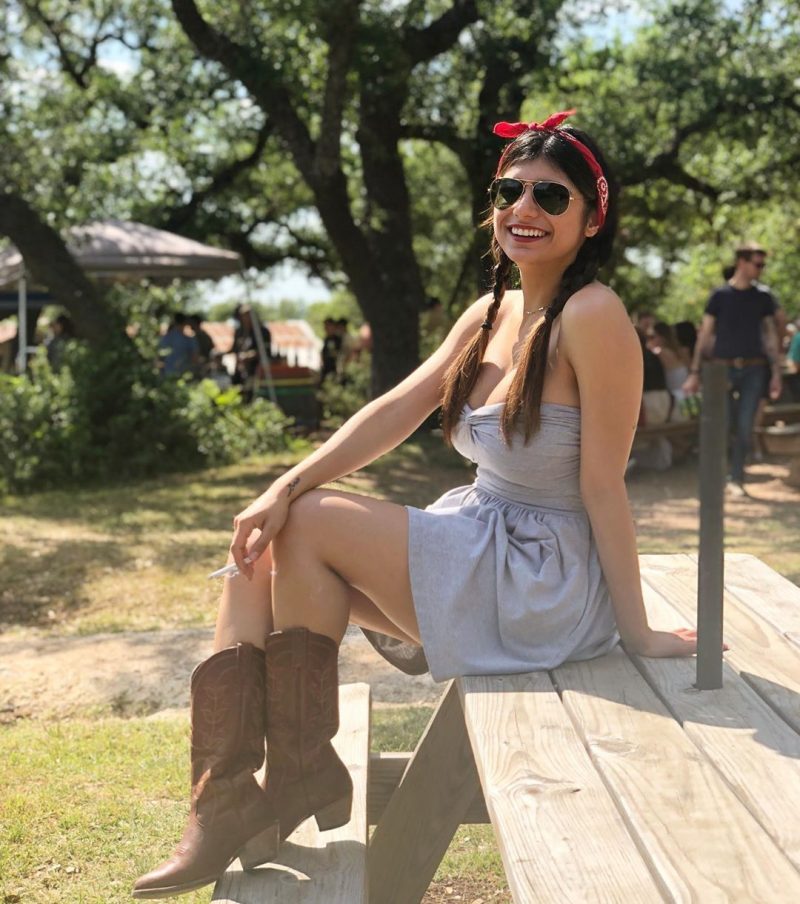 Mia Khalifa is a socially active person. Millions of fans follow her on Instagram and Facebook. In her social media accounts, she trolls about athletes like Mateo Guendouzi as she is a West Ham fan. Apart from ad^lt films, she has also appeared in various sports talk shows. In the year 2017, she started to co-host a sports talk show named “out of bound”. However, she quit the show after 2 months. Later in 2017, Mia Khalifa also quit the p⭐rn film industry.

She was born on 10th February 1993, in Beirut, Lebanon. Mia Khalifa currently 26 years old. Learn about Mia Khalifa: her birthday, what she did before fame, her family life, fun trivia facts, popularity rankings, and more.

Mia Khalifa was born in Beirut, Lebanon, on Feb. 10, 1993. She is of Lebanese origin and brought up in the United States. There is no information about her parents and siblings. But, Khalifa describes her family as “very conservative”. Before doing p*rn films, she was working as a waitress in a fast-food restaurant. A customer asked her if she would do modeling. Mia Khalifa later accepted that offer that led her into the p⭐rn industry. 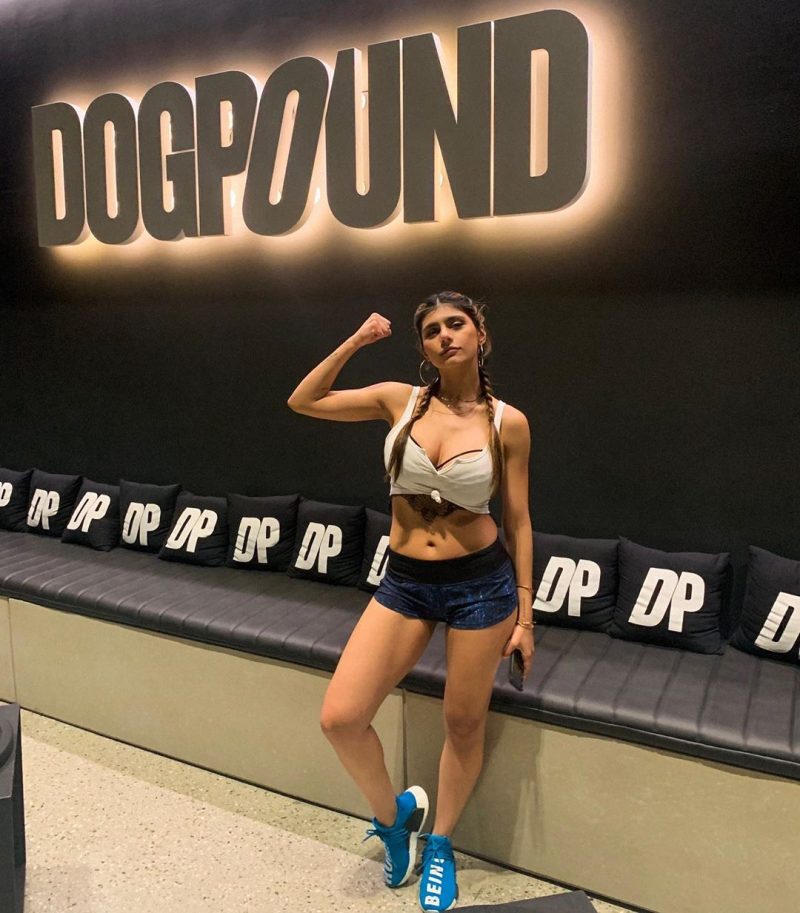 As a teenager, she resided in Montgomery County, Maryland. There she went to a French school where her classmates always bullied her. She went to the University of Texas, El pas, and holds a bachelor’s degree in history.

During her college days, she started working as a bartender and also did modeling. She also made an appearance in the deal or no deal show as a “briefcase girl”. After finishing college, she took a job in a fast-food restaurant where a man asked her to do nude modeling. After doing a couple of controversial ad*lt films, she was the first 22-year-old girl to be ranked as the number one p*rn star. On the P*rn Hub website, more than 1.5 million people watched her film. She even replaced the popular p*rn star, Lisa Ann. Due to negative popularity and threats, she left the p*rn film industry in 3 months. In the year 2018, after three years of quitting, she was still the 2nd ranked p*rn actress.

After leaving the p*rn industry, she started working for a paralegal company as a bookkeeper. She transformed her career into a social media personality, sports commentator, and webcam model. Now, she runs her own YouTube channel in that she live streams twitch and webcam modeling photos. She also merchandises this content to the paetron website. She also sold her photo shoots and videos to a social media website named find row. From the year 2018, she and Gilbert arenas collaborated to host a daily show on YouTube channel. In the year 2018, she started co-hosting a show called Sports Ball alongside Tyler Coe.

In 2020, she got engaged to her Swedish boyfriend named Robert Sandberg. In his Instagram post, her boyfriend shared how he proposed to her. In Chicago, at a fancy dinner, Robert proposed to Mia Khalifa, and she said yes. Her boyfriend is a chef at a popular restaurant. 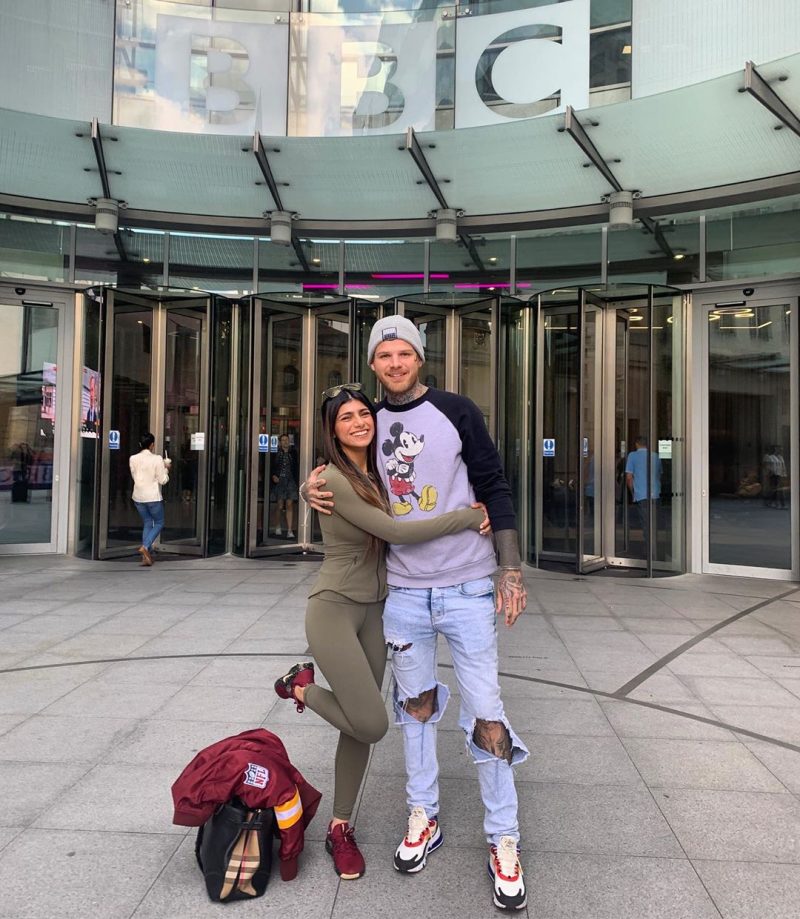 Mia Khalifa is a 25 years old beautiful woman. She is described by her fans as a Middle Eastern beauty. Brunette is her hair color, and height is 5.2 inches. She is residing with her husband in Miami, Florida.

According to a source, her net worth amounts to $15 million USD. She has acted in 21 ad^lt films in her three-month p⭐rn star career. However, in a 2019 interview, she said that she only earned 12000 US dollars from p⭐rn films. Further, she did not receive residuals from p⭐rn Hub or other popular p⭐rn websites. She gained most of the popularity as a social media personality. She has more than 2.7 million twitter followers and 1.67 million followers on the Instagram platform.

How old is Mia Khalifa?

Mia Khalifa is a popular personality on Youtube and Instagram. She is working as a sports commentator and webcam model. Also, Khalifa runs a YouTube channel and streams on Twitch live. She also made guest appearances on some shows.

Her birth date is February 10, 1993, and her place of birth is Beirut. At the moment her age is 27 year old. She and her family moved to the United States in 2001 from their home country because of the South Lebanon conflict. She grew up in a strict Roman Catholic family and her home was very conservative. But now she is no longer following the religion. Khalifa attended Montgomery County, Maryland but she was bullied in the school which were some of the darkest days of her life. Then she finished her graduation from the University of Texas at El Paso and got a BA in history. To get some money she worked as a model and bartender.

Do you want to hear happy news? The former ad^lt film star Mia Khalifa announced her engagement with her long-time boyfriend Robert Sandberg. He proposed to her during the dinner date in Chicago. As she is famous around the world many of her fans are happy about it.

Mia Khalifa is also known by the name Mia Callista. Her birth name is Sarah Joe Chamoun.  Then she became a popular Lebanese-American personality because of her pornographic career. Her career choice led to lots of controversies so she finally left it and started to post her workout and lifestyle videos on YouTube. She is a well-educated woman. She also became a sports commentator.

Only three months she worked as an ad^lt film star and after that, she became a paralegal and bookkeeper. Now she is a popular social media personality because she is a webcam model and sports commentator. Many people love her posts on social media. She talks about her interests in it and engages her audience with her views on health and diet. She also encourages the viewers to try popular brands.

Mia Khalifa has postponed her original wedding ceremony because of the coronavirus pandemic. She has announced this matter on Instagram. Their wedding was planned for June but now it will be set at a later date. However they married at their home in a simple ceremony. Her fiancée is a Swedish chef who proposed to her on March 2018. She flaunted her ring in her Instagram post to share the happy news with her fans. The couple is in love and they are waiting to get married. Mia has readied twelve dresses in her closet for her wedding and she sad to not wear it soon.

The fans all over the world are waiting to get a glimpse of the wedding of their favorite star. But they have to wait some more time for it to happen.

How Online Media and Entertainment Is Changing