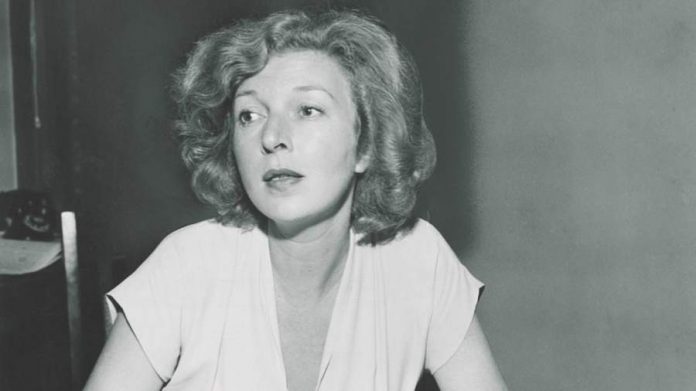 Martha Gellhorn was a War correspondent, women activist, American novelist, and journalist. She preferred to play the role of a war reporter than a mother or a homemaker. Being a war correspondent immaculately can never be imagined by any other woman in that era, she managed to escape with minor bruises and involved about 6 decades of her life in this career to record every major conflict that took place on the planet.

Many wonders why a woman who had the privilege of born into well informed and well-heeled family chose to risk her life visiting the most dangerous and most disgusting places of wars and conflicts to gather reports and record them. Martha could not ask for better feminists as her parents than she had got, which has a major part in instilling this spirit of hers. She was the author of five novels and fourteen novellas and two short story collections.

Martha’s style of writing does not carry any flowery texture trying to reach the point. She is well known for her passionate allegiance to the truth that sparkles throughout her work. Martha has considered her work as a duty to pen down the pain, agony, anxiety experienced by the oppressed people. Her work has set the bar for journalists to accomplish.

*Martha Gellhorn was born to George Gellhorn, a German gynecologist, and Edna Fischel Gellhorn, an American Suffragist, and reformer, on November 8, 1908, in St. Louis, which is the second-largest city in Missouri, United States.

*When Martha Gellhorn was only 8 years old, her mother took her to witness about 7000 people protesting at the Democratic National convention for women’s right to vote. This event described how women were forced to be silent by not being allowed to cast their vote. This was a ‘walk less, talk less parade’ with women wearing white dresses and holding yellow umbrellas. This event has stuck the child and moving forward, Martha had never taken her vote for granted.

*Her parents fed her the confidence that a woman can do anything that any man could do. This would have helped her for the rest of her life.

*Martha was graduated from John Burroughs School which is located in Missouri, St.Louis, and attended Bryn Mawr College which is a women’s art college. She dropped out of college before completing journalism, because she felt that it is not necessary to start her writing career.

*Martha Gellhorn managed to publish her articles in The New Republic. She wanted to pursue as a foreign correspondent and had managed to move to Paris and get a job. She has gotten her job at the united press, Paris, where she lived a happy and romantic life.

*She has faced sexual harassment by a colleague in that period and she chose not to remain silent about it and hence was fired from that job. She continued to live in Paris and managed to sell a few of her articles to several magazines, including Vogue.

*By 1934, she decided to move to the United States as she felt the need for her voice back in the United States. She brought to everyone’s notice that life in the United States is not that glamorous as it may seem. When she was only 25 years old, she published her first novel, ‘What Mad Pursuit’ in 1934 highlighting the experiences she had as an active pacifist.

*Martha Gellhorn’s words were so moving that Eleanor Roosevelt herself read them and reached out to her to become her friend. Through Eleanor, she was hired by Harry Hopkins. President Roosevelt had created an organization called FERA, Federal Emergency Relief Administration operates relief programs and its goal is to alleviate unemployment by creating unskilled jobs.

*For FERA, Martha would travel every day and interview upwards of 5 underprivileged families every single day and listen to their struggles, pain, and distress. She stimulated women to raise their voices against suppressing bosses who were treating them unfairly. This turned into a riot and the windows of the office were broken. She was labeled a communist by this act and was fired.

*After losing her job, she was invited to live and work with the Roosevelts in the white house. She helped Eleanor with her monthly column called ‘My Day’ for a magazine.

*Martha was very grateful for Roosevelts for their kindness towards her, she knew that wanted to move ahead with her career and published her collection of short stories called ‘The trouble I’ve seen’. This described the feelings of Americans who suffered the great depression.

*In 1936, Martha Gellhorn met Ernest Miller Hemingway, an American novelist in Florida at a family trip. She was hired to record the events of the Spanish civil war for a magazine called ‘Collier’s’. In this assignment, Martha was paired with Ernest. They both had a very similar writing style which never shies away to put the truth upfront. They never knew they would get married later.

*In 1938, Martha was appointed to cover the events of World War II; she captured the events in her novel ‘A Stricken Field’. Martha Gellhorn’s official press pass and flight ticket were taken by her husband Hemingway as he had a rage of anger or jealousy on her. She did not give up on this. She was determined and made her way to the spot dressed up as a nurse. Martha stowed away in the bathroom of a ship throughout her journey.

*Martha Gellhorn having no official press pass, struggled all her way to Europe risking her life, still dressed up as a nurse, and helped the people who were injured. She managed to take notes of everything carefully that is happening around her mentally to wrote it all later.

*After the Allied victory, she stayed back to cover Dachau concentration camp liberation. This is a milestone in her career. Martha was one of the few journalists who revealed the scene to the world. Martha kept track of the events staying a few feet away from the corpses of Jewish prisoners. She describes the terrific sight, huge number of bodies laid on the ground with shaved heads that were very thin, unable to identify the age or gender.

*After witnessing many wars, she had the rage of anger towards the governments that are hungry for power and shows no compassion towards people. She captured all her emotions in her book ‘The face of war’ only to reveal how much money the United States had then spent on nuclear weapons which could have been spent for the welfare of the poor and sick people.

*Martha also witnessed how Americans acted during the Vietnam War, it was only then she decided to leave the United States. She has also covered the Arab-Israel conflicts thereafter in the 1960s and 1970s.

*She had shown courage and willpower throughout her life, rightly so, many have called her the greatest war correspondent who has ever lived on this planet. Gellhorn never failed to voice out or record her feelings. Every book that she had published speaks volumes about the oppression that people faced during wars and conflicts.

*Martha has also visited Rome to see children in an orphanage who had lost their vision or limbs because they had accidentally stepped on landmines. She recorded the wailings of the children in her post named ‘The children pay the price’.

*She has written many novels, ‘The Face of War’, ‘The Lowest Trees Have Tops’, about the trip with her husband, ‘Travels with Myself and Another’, ‘The View from the Ground’ and several other articles.

*After her death, “The Martha Gellhorn prize” was established as her work was recognized as a benchmark. To win this award, a war correspondent has to report a human story that describes the events and illuminates the truth, accompanied by powerful facts.

*Martha Gellhorn was married to an American novelist Ernest Hemingway in 1940. Ernest, who had a couple of failed marriages already, realized his true love towards Martha. In 1939, Ernest purchased an estate called FincaVigia in Cuba and the couple lived the fullest life there. Though the relationship was going well for some time, Ernest expected Martha to stay at home and to look after the household chores.

*Martha did not want to take up the roles of mother or housewife; though a comfortable life awaited her, she was very determined to stay as a war correspondent that required her to travel to the most dangerous places. This has brought the dispute between the couple. Ernest cheated on Martha with a woman named Mary Welsh.

*Martha did not give so much importance to her husband and choose to focus on her work more, after their divorce; she chose to remain silent about their relationship.

*She moved pity towards those children which made her adopt a child named George Sandy Alexander Alice Sandy. After dating several accomplished men, Martha married a managing editor of Times magazine, T.S. Matthews in 1954. This marriage also did not last long, they divorced in 1963 and thereafter she remained single.

*Martha had sacrificed the luxurious life that awaited her. She threw the chance to have children, friends, and family. She spent all her precious time traveling and records the sufferings of the people surrounded by her.

*She had told once that ‘If nobody puts it down on records anywhere, then the monsters win totally. It must be someplace on the record because otherwise, they can get away with anything. Does it stop anything? But at least it is better than silence’.

*She moved to London and in 1998, when she was 98 years old, she suffered from ovarian cancer and gone completely blind. She killed herself by swallowing a cyanide capsule. Her relationship with her husband Ernest is the subject of the novel, ‘Paula McLain’s.

Types of Foundation Cracks and How to Fix Them

A Guide for Selecting the Perfect Contract Food Packaging Company

Attract The Customers Online With These Many ideas

You Won’t Believe How Easy It Has Become to Buy WW2...