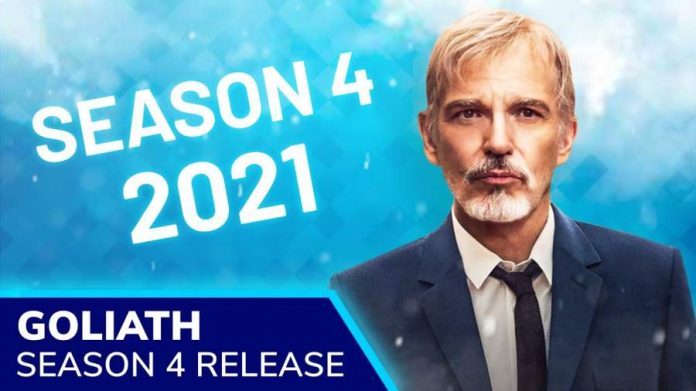 Goliath is a famous American legal drama streaming on Amazon Studios. The creators of the series are David E. Kelley and Jonathan Shapiro. The series introduced the character of a washed-up lawyer named Billy McBride played by Billy Bob Thornton. The first season of the series premiered on Amazon Prime Video on October 13, 2016. Then in 2017, the season 2 of the series was released. The third season of the series premiered in 2019. Now there are talks of the release of the fourth season. Further, the fans of Goliath are eagerly waiting for the series to release. The fourth season will be the final season of Goliath. You can know all about its release date, plot, cast members and more here.

When will Goliath Season 4 release?

Amazon Studios is ready to release the fourth and the final season of Goliath. The three previous seasons of Goliath were great. That is why the creators thought of making the fourth season to give a great conclusion to the series. According to the former plan, Goliath Season 4 is set to release in November 2020. But the Covid 19 pandemic forced the creators to delay the release.

Co-head of Amazon Studios Television Vernon Sanders shared that they have not yet decided on the release date of season 4. Also, he thanked his team for making Goliath one of the popular shows. He showed his gratitude to actor Billy Bob Thornton, Larry Trilling, Geyer Kosinski, Steve Turner and the entire team of Goliath. Further, he was excited to announce about season 4 that will make all of the fans happy.

The new actor of the show Bruce Dern recently shared with Forbes about the updates of season 4. He shared that according to the plan he was set to start the Goliath season. Some of the actors who will return for the season are J.K. Simmons, William Hurt and Billy Bob. He and J.K Simmons are going to play like brothers. But because of the Covid 19 pandemic the filming ended on March 12. Also, the actor assumed that after Labour Day they will get the chance to get back to work. But they have to follow strict restrictions in the shooting spot because of the virus.

Based on all the above information we have to wait for some more time to get details about the release date. But we can be certain of the fact that season 4 will be released and will be the best finale of the Goliath series.

What is the plot of Goliath?

Goliath is the story of a down-and-out lawyer named Billy Bob Thornton. He tries to seek redemption in his life. One of his missions is to get justice in the legal system as he knows that truth has become a commodity. He finds many games played by the rich and powerful to bring down the scales of justice. They are using the justice system and its employees as the pawn for their own selfish needs. Therefore Thornton tries to weaken their links and bring back justice.

Many people love to see Billy Bob Thornton on the screen again. They have become fans of his acting. We last saw him bleeding in a car as Diana Blackwood shot him. In an interview with Entertainment Weekly in 2019, the actor revealed this. He shared that if the creators make the fourth season he will come back to act. As the fourth season will be released soon, we can certainly expect him to return.

Some of the other cast members who may return for the show are Nina Arianda as Patty Solis-Papagia, Tania Raymonde as Brittany Gold and Diana Hopper as Denise McBride. Further, the recurring cast members who will return are Ana de la Reguera as Marisol Silva and William Hurt as Donald Cooperman.

Many expect Dennis Quaid to come back to play as Wade Blackwood. The series may introduce him as the main antagonist. But the Diana Blackwood character played by Amy Brenneman may not return as she lost her life in season 3.

Who are the new cast members?

The actors who will serve as the big bad of the fourth season will be J K Simmons who is going to portray the role of George Zax. He is the head of the pharmaceutical company which is well known in the nation. Then Bruce Dern is going to play Frank, the brother of George Zax. He will serve as a scientific genius and the black sheep of the Zax family.

What can we expect in Goliath season 4?

The plot details of Goliath season 4 have not been released yet. But the series may continue after the dramatic cliffhanger of season 3. Also, in season 3 we saw Billy in danger as he got attacked by Diana. Therefore the viewers were not sure at that time whether he was alive or not. So in season 4, we will see the events after it.

The many activities of the famous Zax family will be the major part of 4. Many of the family members will appear as recurring characters. Will justice be served? Will the bad guys get punished? These things will take place in season 4.

Is there a trailer for Goliath season 4?

Until now there is the trailer for Goliath season 4. So we have to wait for some more time for the trailer to be released. From the trailer, we can guess what route the story will take in season 4.

If you are a fan of Goliath then the news of the season 4 release will surely have excited you. All the memorable characters will come back. Therefore stay tuned for the release.

Suggested : Best Movies to Release So far in 2021 on various OTT Platforms

Everything to Consider When Choosing a Pool Building Company

Trends that can shape up engineering sector

Eden Mor : Everything You Should Know about Israel actress Facts

Repo Rate Vs. Reverse Repo Rate: The Difference To Consider?