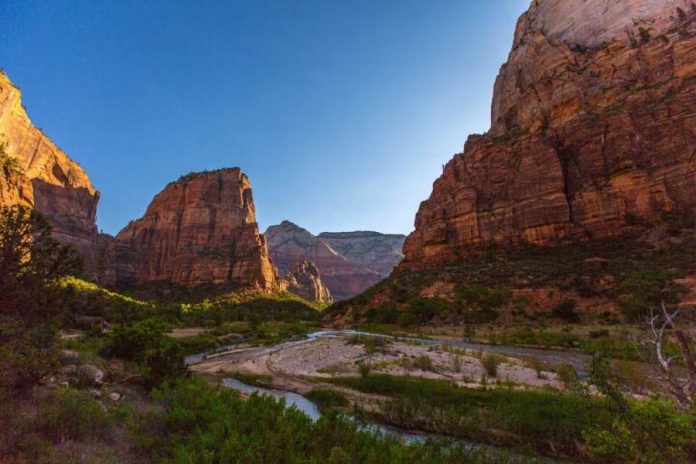 Utah is ranked third overall out of all 50 states on the U.S. News Best States 2021 list. Ranking after only Washington and Minnesota, Utah has particularly high rankings in the categories of the economy, infrastructure, fiscal stability, and crime.

Initially settled by members of the Church of Jesus Christ of Latter-Day Saints in the mid-1800s, Utah has become an increasingly popular destination for transplants from around the country.

Whether you’re considering moving to Utah for its abundance of outdoor activities, for work, or for another reason entirely, there is a lot you will want to learn about this unique US state before packing up and heading to the Beehive State.

What should you know before moving to Utah? Let’s take a look.

The Great Outdoors in Utah Is Out of This World

If you love spending time in the great outdoors, you will love living in Utah. There are countless thrills and adventures waiting for you in this western state.

There are five national parks in Utah. These are Zion, Arches, Bryce Canyon, Canyonlands, and Capitol Reef. On top of that, there are tons of golf resorts and ski lodges throughout the entire state. You can also find the Great Salt Lake right next to Salt Lake City, and tons of truly incredible sites to see across the entire state.

Winter sports are a seriously big deal in Utah. This is particularly true of skiing and snowboarding. Both locals and tourists alike love getting outside and enjoying the slopes during the coldest months of the year.

Whether you love hiking, skiing, or taking photographs, you will absolutely love the diverse landscapes of Utah. You can find salt flat, red rocks, deserts, mountains, forests, and more in this incredible state.

The Cost of Living Is Low

The cost of living in Utah is lower than in other states. Compared to its neighbor state Colorado, Utah is much more affordable. This is a unique state that practically guarantees a high standard of living for everyone.

While the cost of housing is rising in Utah, it is still cheaper than in states like Colorado. Because of the booming economy, it is much easier to make and save money in Utah and it is in many other states. Of course, cities like Salt Lake City will have more expensive housing than the more rural parts of the state.

If you’re seriously thinking about moving to Utah, check out these newly built homes for sale.

The Economy Is Strong

Even though the population of Utah is growing, enough jobs have been created to help match the demand. This keeps unemployment rates low.

In fact, the economy of Utah is growing at a much faster rate than many of the other US states. Utah has even been named the best state for business by Forbes Magazine.

One of the great things about Utah’s economy is how diversified it is. In many places, there is one factor that dominates while others flounder. In Utah, the economy encompasses finance, tourism, mining, petroleum, agriculture, and more.

If you are trying to find a home for sale in a state with many different employment opportunities, you guys a good choice.

They Have a Flat Income Tax Rate

The income tax system in Utah is different than in other US states. There is a flat tax rate for income that is fixed at 4.95% no matter what your income is.

In comparison to other states, though, the taxes in Utah can be high. It falls about halfway down the list of the states with the highest taxes in the country.

The Weather Is Extreme

Depending on where you are in the state, the weather you experience can differ wildly. In the summer in south-central Utah, it can get incredibly hot. At the end of June and the beginning of July, it can get to be hundred and 15°F. Across the state, it can be upwards of 100° during the summer months, with Salt Lake City averaging around 90°.

Small can be a problem in Salt Lake City. For several days in a row, it can blanket the city.

During the winter, there is a lot of snowfall and the temperatures can get into the low 20s.

Every year, the Sundance Film Festival is hosted in Park City, Utah. This is a major event in the world of film, with some of the biggest celebrities flying out every year to watch some of the 200 films screened there.

If you hate the humidity and love the dry heat, then making a long-distance move to Utah might be the right choice for you. After Nevada, Utah is the second driest state in the country and has 300 sunny days every year.

The Crime Rate Is Low

When you look at all of the US states, Utah is in the top 10 states with the lowest crime rate. The rates of violent crime are 40% lower than the average for the United States. It is possible that this is due to the strong religious influence in the state.

If you are looking to move to rural Utah, the crime rate is even lower. Away from the cities, the crime rates are 80% below the average of the nation.

The People Are Friendly

Most of the people that live in Utah have a family nature and are quite kind. This could be attributed to the large percentage of the population that is Mormon, as their values definitely have an impact on the culture.

The city of Salt Lake City is considered to be very progressive and liberal compared to other parts of the state.

Utah Is a Red State

If you are moving to Utah from a state that largely both Democratic, you might find it a bit surprising to live in a red state. Reliably read every election year, you might find that attitudes and used around certain issues are different than you are used to. However, people from Utah are known to be incredibly friendly, which makes it a lot easier to avoid getting into political conflicts over differences of opinion.

60% of the population of Utah is Mormon. When you look at the southern part of the state specifically, you will find that 80% of the population is a part of this dominant religious group. Depending on your feelings about religion and your personal persuasions, this could either be seen as a pro or a con.

Mormons are a cultural and religious group. The primary branch of this movement was started in upstate New York by a man named Joseph Smith. They moved west overtime to escape religious discrimination and eventually settled in Utah.

This PBS article has a good overview of the early history of the Mormons.

There Are 25 University and Colleges in the State

Education is a priority in Utah. There are 25 colleges and universities in the state, the biggest two being Brigham Young University and the University of Utah.

It’s a Great Place to Look at the Stars

If you have never seen the Milky Way before, you’re definitely going to want to at least visit Utah. Buying a house in Utah, though, basically makes it inevitable that you will go camping out where you can see more stars than you ever thought could possibly exist.

Utah Has the Fastest Growing Population in the Country

Over the past decade, the population of Utah grew by 18.4%. If you’re looking for a home for sale in Utah, you might like to know that you’re not the only one.

Moving to Utah: Is It Right For You?

Utah is an incredibly unique US state. With a highly diversified economy, a strong tourist economy, a low crime rate, and incredible natural areas, more and more people are realizing that Utah is a place for them.

That being said, if you are moving to Utah it is a good idea to research what the state is like as it is quite different from other US states. Because of the influence of the Mormons on the culture, living there is a noticeably different experience than some of the other Western states.

Did you find this article on moving to Utah interesting? If so, be sure to check out the rest of our blog for more fascinating and informative content!

Benefits Of Hiring A Commercial Locksmith

Everything to Consider When Choosing a Pool Building Company

Step By Step Instructions To Expand Our Wifi Switch Speed

Solution to Orthotics and Prosthetics Prior Authorization through PriorAuth Online