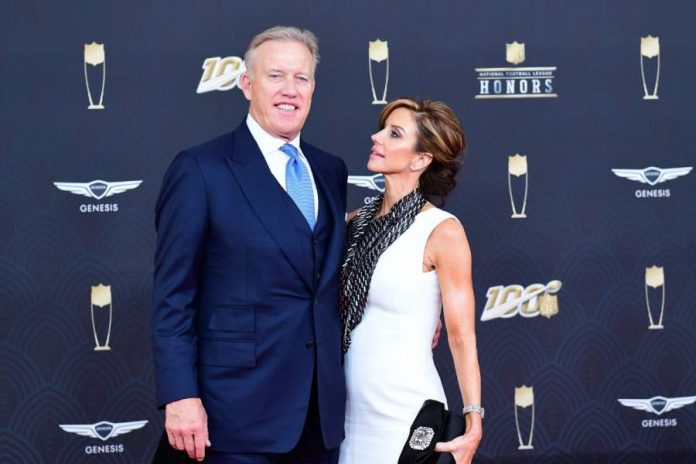 The name Janet Elway is not at all unfamiliar to many of us, who follow the news of the sports world. She is a former avid swimmer, who has been awarded lots of international recognition and titles. Apart from that, Janet is also famous for another reason. She rose to prominence following her marriage to Denver Broncos quarterback, John Elway. Now you can all recognize her right?

So if you are curious to know more about the celebrity swimmer as well as the ex-wife of the famous sportsman? Stay tuned to this article! Today, we will be discussing some untold truths about Janet’s life and let you know about all the present gossips surrounding the celebrity. So let’s get started!

Since a lot of Janet Elway’s fans are curious to know more about her life, we will be sharing some interesting details about her life. She was born on 17th February 1961, in Seattle, Washington. Therefore, presently she is 61 years old. Janet was born and brought up in her hometown Seattle by her family. As far we ethnicity is concerned, she is Caucasian and her nationality is American.

Janet Elway was initially Janet Buchan before her marriage to the famous American footballer John Elway. As we were discussing earlier that Janet had spent a significant time of her childhood days in Seattle with her loving family. Do you know where was Janet educated?

Well, the celebrity attended the Woodrow Wilson High School in Tacoma. After that, she completed her graduation from the prestigious Stanford University in 1983. Janet holds a bachelor’s degree in Sociology. In fact, it was during her university days, Janet became famous for her amazing skills as a swimmer. Furthermore, she was also announced as the world-class swimmer over there.

Did you know how many awards and recognition Janet achieved as a swimmer? Let us discuss it right here. During her university days, Janet had won six state championships as a swimmer. They include two each in the 500 -yard freestyle, 200 individual medley as well as two more in relays. At the same time, she is also a gold medalist in the 400 meter IM at the 1979 World University Games in Mexico City.

It was in the year 1980, that Janet led Stanford to its national women’s swim title. In fact, she also holds a national record in 400 meter IM. Moreover, you may not know, but she was also a high point winner in the Association of Intercollegiate Athletics for Women (AIAW) meet.

At the same time, Janet Elway was also inducted into the hall of fame for Tacoma Pierce County Sports in 2005. In addition, she is also a philanthropist who is involved in several charitable works in Denver. She also has a fundraiser, “Janet’s Camp” to help needy people.

Apart from her other identities, people know her commonly as the ex-wife of John Elway. The celebrity couple tied the knot in a low-key ceremony in 1984, a year after Janet’s graduation. In fact, the duo enjoyed marital bliss for many years.

However, it did not last long. In 2002, the power couple opted for a divorce. Although neither Janet nor John disclosed the actual reasons behind their separation. As per sources, it was due to John’s hectic schedule which ruined their long-time relationship. Moreover, the couple also shares four children, Jordan, Jessica, Juliana, and Jack.

Are you wondering if the celebrity swimmer has remarried someone presently? Let us take a glance over here. After her split from John, Janet again chose to set up her life with a new partner. She is presently the wife of the financial advisor Kevin Kretzmar. He is the branch manager for Summit Brokerage Services as well as the former president of Centennial-based Safe Money Inc.

In fact, the couple was engaged to each other in 2011. Janet shared the happy news during a dinner party at an award show. As per the news they were dating for over a year before taking the decision of marrying each other.

In fact, her ex-husband John Elway too began dating Paige Green a former cheerleader. It was in August 2009 that the couple tied the knot.

Do you know the present net worth of Janet Elway? Well, as you can understand she is a celebrity swimmer as well as a social worker. Therefore she earns a decent amount of money. As per her net worth, it is around $1 million.

At the same time, her ex-husband John Elway has a net worth of around $145 million. Even her present husband has a huge net worth.

Well, Janet is an extremely successful woman. As you know she is involved in various events of social works. In fact, she has also planned to open her home to charitable fundraisers that she received during her divorce settlement. Presently she lives in a luxurious house in Belcaro, Denver in Colorado with her family.

What Is Digital Asset Management … And Why Do You Need It?

How to Find Online Clients for Real Estate Brokers