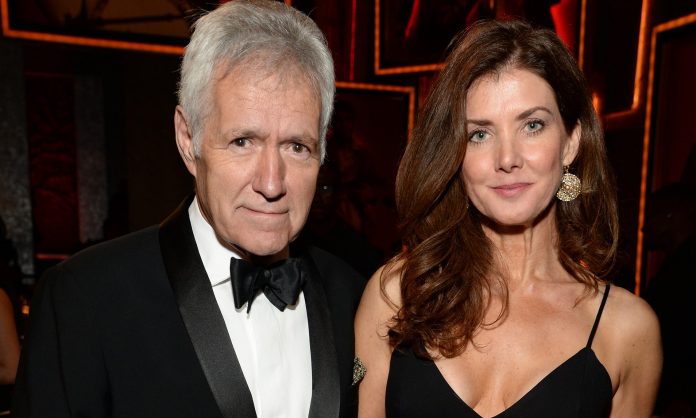 Jean Currivan Trebek is a real estate manager and a businesswoman. She is well known as the spouse of George Alexander Trebek. She is in the limelight because of the celebrity status of her husband. Currivan is a woman who is very committed to her job. She is also maintaining a healthy relationship with her husband Trebek. He is a famous television personality from Canada well known for his part in TV shows. She is a beautiful woman who has appeared with her husband on many occasions. Moreover, she has two children with her husband who is the apple of her eye. Know all the details about Jean Currivan Trebek here.

Jean Currivan Trebek’s birth date is 3 September 1963. Her birthplace is Huntington, Long Island, New York.  More information about her background is not available. Her father and her mother identity is also not revealed. She studied at Harborfields High School located at Greenlawn, New York. Currivan is also a religious person and grew up in a devout Christian household. She is member of North Hollywood church of religious science and managed a singing bowl meditation at the church.

Trebek is a Canadian-American TV personality, actor and host. He hosted the popular show called Jeopardy! for which he became very famous. He also was part of the game shows such as Classic Concentration, Battlestars, Double Dare, To Tell the Truth, and lots more. He also had made many TV appearances in which he came as himself. Trebek has received thirty-one Emmy nominations, winning seven awards.

The birth date of Trebek is July 22, 1940, and his birthplace is Sudbury, Ontario, Canada. He is the son of George Edward Trebek who is a chef and Lucille Lagacé who is a Franco-Ontarian. His household was French-English. He worked as a bellhop at age thirteen where his father was a chef. He went to the University of Ottawa for his education and then he graduated from it in 1961 with a degree in Philosophy. Then he was also interested in a broadcast career and got a job at Canadian Broadcasting Corporation in 1961.

Then on 1977, he became a host on The Wizard of Odds in the NBC channel. Then he also came on many shows as a host because many people loved his presence on TV. For twenty-four years, he was part of Jeopardy!

Trebek suffered a minor heart attack on December 11, 2007. Currivan was deeply troubled by the health of her husband. Then he experienced an injury in his Achilles tendon and his legs got cast for six weeks. Then again he had a minor heart attack on June 23, 2012, but he went back to work in July. His health became even more critical when he got diagnosed with stage IV pancreatic cancer. In March 2020 he survived one year of cancer treatments. He is still surviving the terrible condition with the support of his family, friends and God. There is a memoir which he has published titled The Answer Is…: Reflections on My Life.

How Currivan met her husband?

The couple both met a party in the 80s. They both liked each other in first glance and started a relationship. Trebek is twenty-six years older than Currivan. But the age difference was never a problem in their relationship. Jean was very nervous at the starting of the relationship because Trebek was a famous star. But their love won overall. They got engaged in 1989 and married in 1990. They have two children together now named Matthew and Emily. Their family shares a good bond.

Currivan’s son Mathew Trebek is not part of the Hollywood industry like his father.   He is running a popular North Harlem Mexican restaurant located in Hamilton Heights. He is thirty-three years old now.

Emily Trebek has taken up the real estate business along with her mother. She has appeared with her father on the show however is not active in the Hollywood industry. She is more interested in a business like her mother and brother.

The net worth of Jean Currivan Trebek

Jean Currivan Trebek is a wealthy woman. She is a real estate manager and a businesswoman. Her husband is a successful TV personality and his net worth is $75 million. They both are living a comfortable life with their family. We do not know the net worth of Currivan as she has kept it private but it will surely be more.

The husband and wife are supporting many charities with their money. Currivan’s husband is the active member of World Vision Canada which is a charity organisation. He is also part of United Service Organizations and has offered morale boosts for the troops. He and his wife donated 73 acres of property in Hollywood Hills for the use of Santa Monica Mountains Conservancy. In March 2020 they gave $100,000 for a homeless shelter in Los Angeles. This shows the big heart of the Trebek family.

Jean Currivan Trebek is a popular personality however she is a quiet woman who prefers her privacy. She is a great wife and mother.

A Know-it-all On Soap2day And Soap2day Virus: How Far Removed Is The Site From...

How Do You Manage an Online Store Successfully?

Move In Checklist: 3 Pro Tips for Moving Into a New House

8 Best Plus Size Swimwear for Women