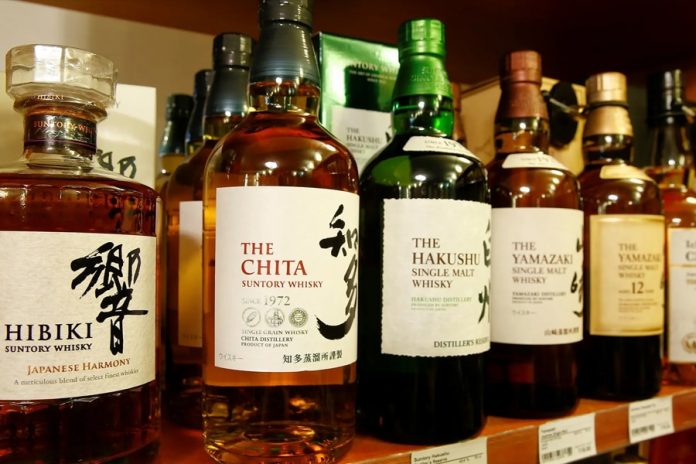 I recently came across Japanese whiskies, and my first experience was AMAZING!

I particularly liked that the experience did not stop at the taste. Most of the bottles I tried called out to me before I even took a sip.

If you are here, it’s because you also just stumbled on the world of Japanese whisky. And if you are just finding out, yes, they exist.

Although not as established as other whisky styles, it has come a long way since its relatively younger inception.

Japanese whisky was born in 1923 when Masataka Taketsuru and Shinjiro Torii decided to capitalize on the former’s trip to Scotland, where he was taught in the science of distillation by Scottish brewmasters.

The duo used this knowledge to start up the Yamazaki Distillery outside Kyoto, where Japan saw her first commercial brown spirits produced. The Yamazaki distillery laid the foundation for today’s Suntory whisky.

Time went by, and Taketsuru decided to move his trade to a northern Japanese island (Hokkaido) because the climate condition there was similar to that of Scotland, where he was trained. He founded the Yoichi distillery in 1934 and paved the path for Nikka Whisky.

Suntory and Nikka whisky still dominate the Japanese markers till today with an IMPRESSIVE 90% hold.

Now to the whisky business!

If you want something from this era, look no further than this whisky from the popular 2020 (At least something good came out of 2020). The Mars brand is not the most popular on the market, but the Komagatake limited edition begs you to try something new. The single malt whisky is produced at the Nagano alps in the Shinshu distillery. Every sip is a flavor overload as this whisky aged for three years in American white oak, and sherry casks delivers a powerful punch. You are met with citrus, vanilla, and chocolate deliciousness in one gulp.

This is the poster boy for readily and accessible Japanese whisky. Don’t let the affordable price tag fool you; you are getting A LOT of whiskey for your money. The Suntory Whisky Toki is a blend of grain whiskies and malt by the Yamasaki, Hakushu, and Chita distilleries. Who says there is no perfect Japanese whiskey for cocktails? With a bright, fruity not, this whisky blends seamlessly with other ingredients.

Where are my sherry lovers? The Ohishi was made with sherry lovers in mind, and it packs a different twist. Instead of being malted barley, the spirit is made with two kinds of rice and then aged in barrels. Every sip of the Ohishi serenades you with custard, cherry, and vanilla notes, topped off with oak and toasted nuts.

4. Nikka From the Barrel Whisky

The name is not the only thing that stands out about this whisky. It has a relatively high alcohol content that gives you that satisfying heat with every gulp. Nikka from the barrel was native only to Japanese drinkers, but the quality meant that more people outside Japan wanted a taste, and now it has become an international celebrity. At the bottom of your glass are toffee, vanilla, fruit, and caramel flavors.

This is one whisky that needs no introduction as the Suntory Yamazaki is highly sought after. If you are a whisky connoisseur, I am sure you remember when this particular bottle was retailing at $40. Nowadays, you can not come anywhere near this bottle with that amount of money. But one thing that has not changed is the quality of this brown spirit. The smooth blend makes this the ideal Japanese whisky for cocktails. But to savor the melon, buttered toast, spice, and citrus flavors, you’d need to order your Suntory Yamazaki neat.

It is only fitting that I round off this list with this whisky. If you were paying attention, you would have noticed that this gem was named after one of the founding fathers of Japanese whisky. As if capturing the essence of Taketsuru himself, this whisky is legendary in its own rights. The Nikka Taketsuru Pure Malt is the whisky child of both Miyagikyo and Yoichi distilleries. If you know your whisky, you would know that this expression was discontinued a while back, and a new iteration was released in November 2020. While the discontinued version was good, the refined version brings more smoke into the mix.

Wow! That’s a lot to take in. I don’t know about you, but all these exciting options don’t make my choice easier. Maybe I’d buy them all, keep them all at home and stare at them all day. But one thing is sure about this list.

There are no wrong choices!

Want to get your hands on some premium whisky? Check out The Whisky Club for monthly exclusive subscriptions.

The 10 Best Sugar Alternatives to Add to Your Diet

How To Buy Your Mercedes Vito Fuel Filter?

How to Surprise Your Boyfriend

How to Save Money when Purchasing a Real Estate Property

Have fun with your Fitbit with these tips and tricks

The Specialty Of Chiropractic Care Is Its Holistic Approach To Treatment

What To Look For While Buying Shop Roller Shutters For Your...