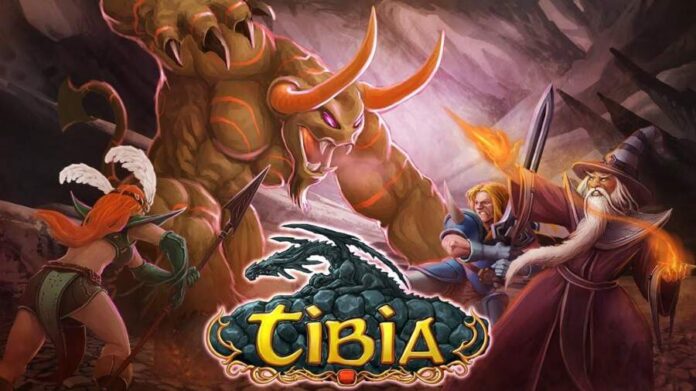 Tibia is an online massively multiplayer game. It is a role-playing game. The game is developed by “CipSoft”. This is a vintage game. It was released in January 1997. It is considered among the pioneers of multiplayer role-playing games. It is one of the longest-running RPGs. Tibia is a two-dimensional tile-based game with pixel-art graphics and a top-down view set in a fantastical universe.

In Tibia, players explore a vast and detailed fantasy world, practicing their abilities and conquering obstacles as they acquire power and experience. At level 8, characters can choose one of four vocations, and at level 20, they can develop in their profession and earn new abilities. The player is allowed to master some magic spells provided by the game.

Since the start of the game, Tibia has been regularly expanded and updated. A huge and complex world has been created because of these updates. If you had to dedicate just one second to each accessible square, it would take almost forty days to explore the entire map.

The core game entails slaying creatures to obtain loot and experience to level up. Players choose one of four distinct vocations at the start of the game, each with its own set of spells and abilities. Players can earn rewards by completing quests, killing bosses for rare items, fighting other players, forming guilds, and purchasing and decorating residences or guild halls. Perfecting skills and role-playing with others can also be done.

Players will explore Tibia’s island environment as knights, paladins, sorcerers, or druids. A character’s level can be increased endlessly. Characters can, however, lose valuable experience points as well as other achievements and benefits if they do not survive an adventure.

Real friendship can be developed through Tibia. Tibia is a classic game with a high-risk factor with great freedom of play. In this game, players can interact with each other.

Player killing is allowed at any moment on Open PvP servers, but doing so earns you a skull; as long as you have a skull, you can be murdered at will by other players. PvP is disabled on Optional PvP servers except during mutual guild conflicts.

Players were allowed to kill each other in previous editions.  This has been changed now. But due to optional PvP mode, the killing depends on circumstances. There are houses and guildhalls available in the game and players are allowed to purchase them at any time.

The in-game currency is known as coins in the game. It is used to purchase the above-mentioned houses and guildhalls. Tibia coins are collected after completing missions and making progress in the game. Various online forums are available from where you can get coins and accounts with a huge amount of coins.

Some Tips To Consider Prior Hiring Professional Auto Locksmith Near You

Is Soap2Day Not Working? What Exactly Happened to it?

How to Plan a Luxurious Tour in India