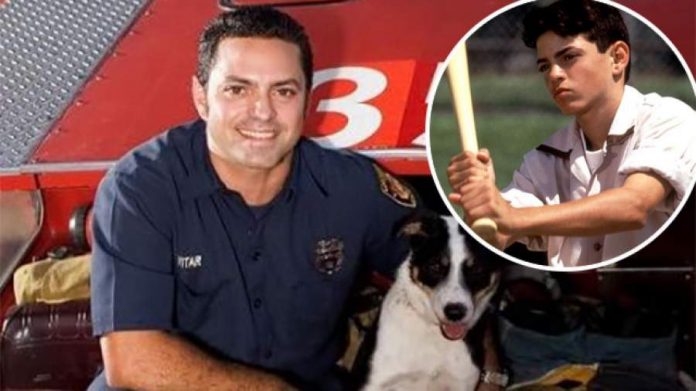 Mike Vitar, who is also known as Michael Anthony Vitar is a famous actor as well as a firefighter. Fans know him best for his role as Benjamin Frankin, ‘Benny the Jet’ Rodriguez in ‘The Sandlot’. In addition, he has also played a few other roles that make him quite famous. So, if you want to learn more about the fascinating actor, and how he is doing right now, then go through this article.

One of the inspiring actors of his time, he truly left a mark on his fans. However, he didn’t let his passion for acting stay within for a long time. So, what happened to the person? Well, before coming into that, let’s check out a few details of his prior life.

The Actor was born in the year 1978, on 21st December in Los Angeles, California to his parents. Therefore, Mike Vitar is currently about 43 years old now. Since he was born in America, he holds American nationality. Moreover, he also belongs to the Cuban ethnicity. As for his zodiac sign, it’s Sagittarius.

Though he hasn’t revealed much about his parents, he has a brother and a sister. They are Pablo and Elizabeth, respectively.  Moreover, it’s worth mentioning that he is the youngest of the three children in the family. His elder brother, Pabo.P.Vitar was also an actor, whom you can recognize as ‘older benny’ in ‘The Sandlot’ movie. However, he passed away back in 2008, on 29th January.

Furthermore, Mike Vitar received his education from St. Francis high school, one of the most prestigious schools in his locality. Thereafter, he went into college and graduated from there in 1997.

It’s worth mentioning that when he was just 12 years old, he showed an immense passion for acting. Therefore, in 1991, he made his debut as Anthony Gambuzza in the pilot episode of the TV series Brooklyn Bridge. The same year, he also performed as the character Arturo in the Diplomatic Immunity movie.

Thereafter, in 1993, he also played the role of a young boy in the movie Sunset Grill. Moreover, the same year he appeared as Benjamin Franklin in the movie, The Sandlot, as we mentioned before.

Due to his awesome performance in the film, he earned the Young Artist Award for an Outstanding Youth Ensemble in a motion picture.

Furthermore, in the same year, he played the role of Luis Mendoza in The Mighty Ducks. Thereafter, three years later, he played the same role in the third part of the movie. In addition, he also made a few appearances in other TV shows. For example, he appeared as a teenage boy in NYPD Blue’s episode ‘Girl Talk’.

Moreover, Mike Vitar also starred as Carlo Lunes in the first few episodes of the Chicago Hope series, ‘Mother, May I?’, back in 1997, which was famous.

What Does The Actor Do Now?

Well, he bid adieu to his acting life in 2002, June, and became a firefighter to serve the Los Angeles Fire Department. Therefore, he is now a firefighter, who serves there.

The former actor tied knots with Kym Allen, who is a professional photographer, back in 2006. Moreover, the couple is blessed with three children as well. They are Eli, Wesley, and Norah.

His Involvement In A Conspiracy

In November 2015, he was convinced of an assault of a young man near a party. The incident happened on Halloween night, 31st Oct 2015. According to the reports, Mike and a couple of his firefighter friends attacked Samuel Chang, the victim. The reports also said that Mike and his friends were off duty during that time.

As per the reports, the victim was attacked profusely and therefore suffered a brain injury. Due to such a case, the Fire department has placed Mike Vitar under leave till the case continues.

As of 2021, the former actor Mike Vitar, who’s currently a firefighter, has a net worth of about $300,000. In fact, it’s his current job that is the main source of his income.

Work Injuries: 5 Pro Tips for Returning to Work After an Injury

The Basics of Insulation Resistance

The 7 Most Popular Online Casino Games In 2021