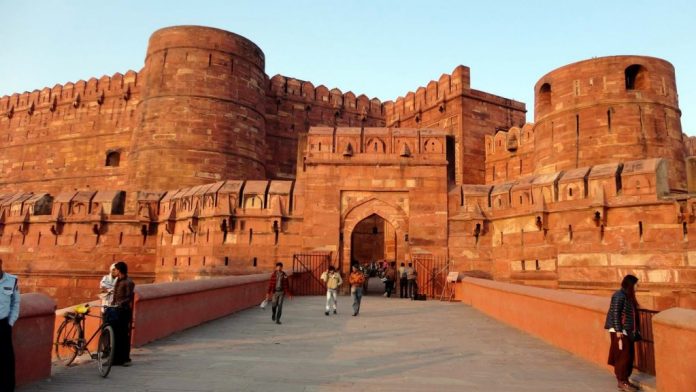 The Agra Fort is one of the main attractions of Agra. It has been regarded as highly significant Mughal forts in India. One of the interesting things about this fort is that it was ruled by four generations of mighty Mughal emperors. This fort was earlier famous as “Badalgarh Fort”. Later, it got considered as one of the monuments in India that was tagged as a World heritage site. If you are planning to visit this fort, then we have provided you a comprehensive travel guide that will tell you about its fascinating history and the best way to visit this place. This information will make your visit convenient and enjoyable.

About the Agra Fort

Agra has always been the capital of the powerful Mughal Empire. After Taj Mahal, this Fort is the 2nd highly visited monument in Agra city. It was built as the “royal residence”. Agra fort was one of the Indian monuments that was declared as a “UNESCO World Heritage site” in the year 1983. This monument reflects both the splendor and strength of the entire Mughal dynasty, which dominated the country for more than three centuries.

The Agra fort has been existing since 11th century. This structure suffered severe battles as well as reigns of many different rulers. When it was under the rule of Rajput Kings, it was called as “Badalgarh”. It got constructed to its present form in the rule of the great Mughal emperor Akbar in the 16th century. This fort was a classic example of Hindu and Islamic style of architecture with Bengali and Gujarati architectural structures. Most of such architectural features got demolished by Shah Jahan for his desire to build it with marble palaces.

Akbar rebuilt the entire structure from red sandstone. Agra Fort was regarded as the 1st grand monument of the Mughals. This fort was basically used for military installation. It has a massive seventy-foot high wall stretching for about two kilometers that spans across 94 acres of the land. This fort also has a secret tunnel which used to help the king and rulers to escape through it. However, now this place has been closed by the government of India. With the independence of India, the Britishers handed this fort to India. Agra Fort is presently used by the Indian Army.

What you would get to see in the Agra Fort?

Agra Fort is popular and well known for its incredible architecture that incorporates Akbar’s signature Hindu and Islamic styles. You can find several buildings with Gujarati and Bengali features in the fort. This fort has got two gates which are known as “The Delhi Gate” and the “Lahore Gate”. Tourists are allowed to make their way into the fort through the Lahore Gate.

The Delhi Gate is designed to be royal. It is adorned with white marble. There is one inner gate known as an Elephant Gate due to the statues of two elephants depicted on it. The primary building of the Agra fort is called as the “Jahangir Palace”. It has beautiful structures constructed by Akbar for his son Jahangir.

There is another Mahal inside the Agra Font as “Khas Mahal”. This mahal was made by Jahanara, the daughter of Shah Jahan. It is the place where Mumtaz Mahal used to live. It is a blend of Islamic and Persian features. You will be amazed to look at the precious gem work and the beautiful floral inlay work. Ornamented ceiling, walls, lattice window, alcoves, fountain are worth to watch. Musamman Burj is an octagonal shape fancy jail. It is the place where Emperor Shah Jahan was detained till death by his son. You can see the Taj Mahal from this tower.

There is one wooden hall which is known as the “Diwan-i-Khas” which was made for the special guests. This hall is seen to have a marble inlay work, Persian art work and floral motif. It holds the famous Peacock Throne that has the most valuable Kohinoor diamond. This feature made this throne one of the most prized possession by Mughals who then lost it to the Persian ruler Nadir Shah in 1739.

Agra is located approx. 200 km south of Delhi, in Uttar Pradesh. Agra Fort lies around 2.5 kilometers in the west of the Taj Mahal, situated along the Yamuna River.

Ideal time to visit the Fort

You can visit this spectacular fort at any time throughout the year. However, winters (November to February) presents the loveliest climatic conditions. The Agra fort is open from sunrise to sunset. It is better to avoid it during holiday season as the fort is heavily crowded at that time.

How to Visit Agra Fort

Agra is only 200 km away from the Delhi airport. So, the best thing is to reach Delhi, and from there you can hire a cab, a bus or a train to reach the fabulous city “Agra”. In Agra, this fort is just 2-3 km away from the prestigious “Taj Mahal”. Due to closeness of Agra Fort and Taj Mahal, people mostly combine both these sights together. Sunrise or sunset is the best time to visit Taj Mahal. You can visit Agra Fort in the afternoon time after or before seeing the Taj Mahal.

There is a facility to book tickets both online or on the spot. Children below 15 years are provided free entry. It is important to note that due to strict security check, no one is allowed to take headphones, electronic goods, cell phone chargers, food, knives, tobacco products and alcohol inside the Fort.

Agra Fort is a real retreat for all those who are interested and passionate to explore about it and Mughal rulers who ruled this place. It is one of the most beautiful and artistic places in India. Its splendid beauty would definitely amaze you and will surely make it a lifetime remembrance for you.

Gerber Final Expense: An Insurance Policy With Your Interests At Heart

Some Basic Knowledge About United Airlines

5 Reasons To Leave Pool Equipment Repair To The Professionals