Emme Maribel Muñiz is the daughter of popular American singers Jennifer Lopez and Marc Anthony. This celebrity kid is a vocalist and made her appearance in the Super Bowl LIV Halftime Show. She received the spotlight after broadcasting her talents in the huge Super Bowl platform. Audiences loved watching her performance as she exhibited her mother’s singing talent. The super bowl episode of Emme Maribel Muñiz is also the most-watched episode of the season. In this article, you can know some interesting facts about Emme Maribel Muñiz. 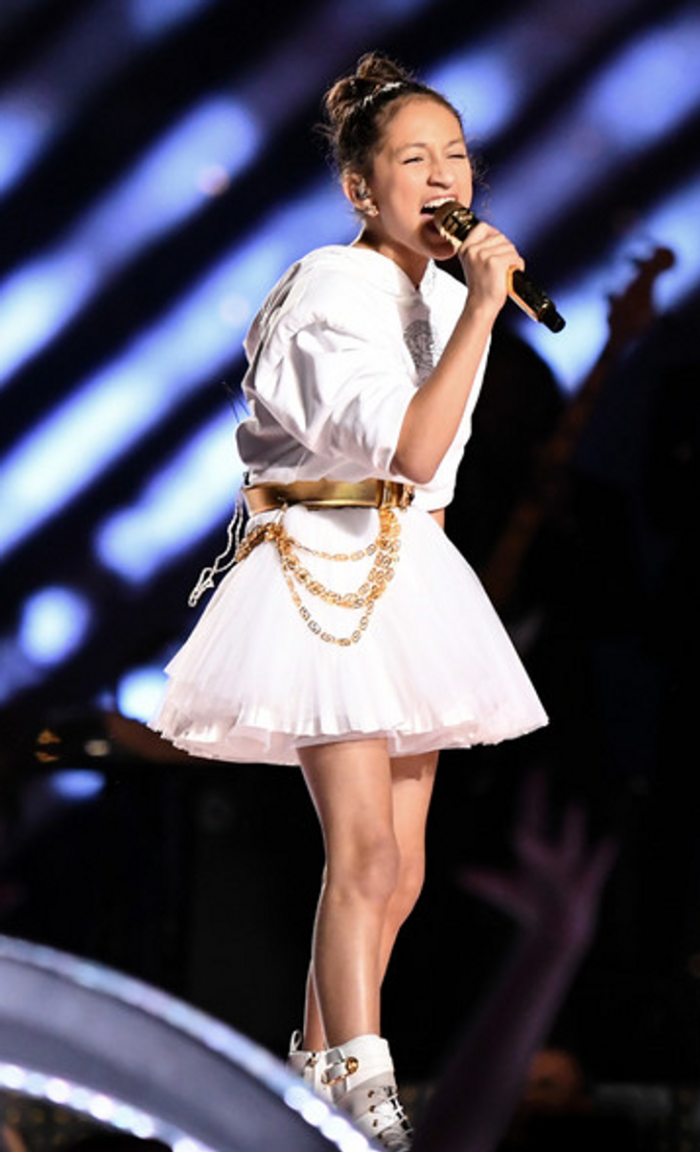 Emme Maribel Muñiz was born on 22nd February 2008 in long island, New York. Her full Puerto Rican name is Emme Maribel Muñiz Lopez. This 12-year-old celebrity kid possesses American nationality. Her mother calls her by the nickname Lulu. Emme’s mother Jennifer Lopez is the most celebrated American actor, fashion designer, businesswoman, producer and singer. Her father is also a famous American singer, producer, actor, and TV personality. Emme has a twin brother named Maximilian Muniz. Emme and her twin brother are very close and they were raised together.

Her parents tied knots in the year 2004. Later, the couple was blessed with two beautiful children Emme and Max. Unfortunately, after a ten-year long relationship, Jenifer and Marc got divorced when Emme was six years old. Currently, Jennifer Lopez is married to Alex Rodriguez. Jennifer and Alex met each other at a restaurant. Also, Marc Anthony and her father got remarried to Shannon De Lima but they split in 2017.

Emma has three half-siblings who are Cristian Marcus Muñiz, Ariana Anthony and Ryan Adrian. The educational background of Emme remains unrevealed. However, it is known that Emme and her twin brother are attending the same school.

Emme has been popular since her birth as she is a celebrity kid. People Magazine purchased the cute photos of young Emme and her twin brother Max. The photos were purchased for a high price that is six million dollars. Later, this picture was published in the magazine’s cover page and it created a buzz in the media at that time. Moreover, the twins together made their appearance in the popular Ellen DeGeneres show. Emme and her brother are very popular at a young age so their mother hired bodyguards for safety. Furthermore, Emme follows her mother’s strides and has accompanied her in various famous TV shows.

Also, Emme made an appearance in her mother’s music video “Limitless”. She was portrayed as Jennifer’s younger self in that video. Additionally, she got an opportunity to sing with Shakira and her mother Jennifer in super bowl 2020. This video gained Emme more fame and popularity. Also, after that Emme travelled with her mother and performed many songs with her.

Recently, Emme got much recognition for her “If I ain’t Got You “Alicia key cover. Many fans around the globe appreciated her for excellent singing skills. Many say that Emme has all the good qualities of her mother Jennifer Lopez. In the year 2018, Emme wrote a book titled “Lord help me”. This book showed Emme’s entrepreneurial spirit like a mother. Also, she went to distribute this book on popular platforms alongside her mother.

Emme has not received any awards till now. However, she has participated in numerous award shows with her mother. Many expect that Emme would receive the Billboard Icon Award for the best vocalist like her mother. Moreover, Jennifer Lopez has received numerous awards.

Emme gained more popularity after appearing with her mother on the super bowl show 2020. Emme received most of her recognition from this show. Many audiences were surprised to see a smaller version of their favourite star J.Lo. After so many years J.Lo and Shakira gave an electrifying performance on stage.

Later, they shared the screen with the talented Emme. All the three performed on the classic song named “Let’s Get Loud.” This fantastic performance was a dedication to the late NBA player Kobe Bryant. Also, she wanted to inspire the Latinx community. In an interview, Jennifer told about the experience of sharing the stage with her daughter Emme. Further, she said that when she sees Emme it reminds her of all the little girls in the world and also what two Latinas can achieve in the country. This statement was made by her as she is a Puerto Rican and Shakira a Columbian.

Some of the other songs performed in the event are “Jenny from the Block”, Love don’t cost a thing” and “Hips don’t lie”. Also, two guest performers Bad Bunny and J. Balvin joined Jennifer and Emme onstage.

Emme is an 11-year-old attractive girl with a slim figure. Her dark brown eyes and dark hair colour beautifully matches her skin tone. Emme has no social media account but she has a strong fan base. However, many get to see the cute photos of Emme in her mother’s social media post. Also, Jennifer Lopez is one of the most followed singers on Instagram and other social media handles.

Emme is earning from her childhood because her childhood photo sold for millions of dollars as it got featured in the People Magazine. According to a reliable source, the net worth of Emme is estimated as 1 million USD. Emme is achieving so much as a young star. It is expected that she will do many extraordinary things in the future with her talent.

Emme is single and has not been in any relationship. She is also very young to be involved in a relationship and to have a boyfriend. Emme is often described as a sensible girl with a good sense of humour. Like her mother, many expect Emme will find her true love in future.

Even being a celebrity kid Emme Maribel Muñiz is a hardworking young girl. She is a true inspiration for young children around the world to pursue their passion. Her mother Jennifer is also a role model for parents as she supports her daughter to pursue her dreams.

Top 10 Most Beautiful South Indian Actress in the World

Tips For Your Legal Consultation About Your Workplace Bullying

Loan Against Property From Bank Or Nbfc- Which One Should You Opt For?

Love Adventure Sports? Secure Yourself with this New Insurance Policy

New Technologies Are Changing The Scope Of CCTVs