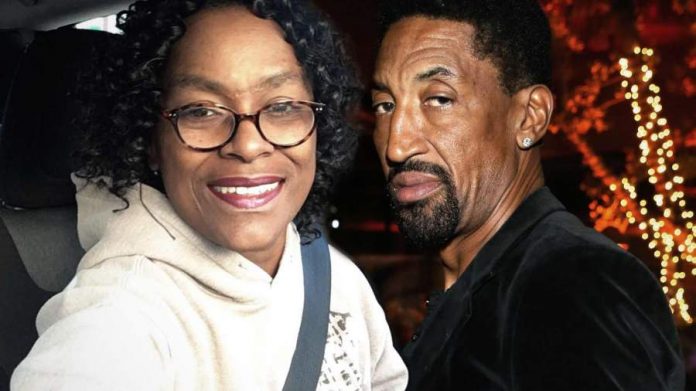 NBA superstar Scottie Pippen is once again on the news, but it is not for the good. Recently the star has revealed that his son with his first wife has passed away on April 18, 2021. But today we will focus on his first wife Karen McCollum. The former basketball player has father seven children with different women. However, it was McCollum who was his first and will continue to be a good friend to him.

Who is Karen McCollum?

Scottie Pippen who turns 55 this year first married Karen McCollum. She was a professional musician. The NBA superstar took to the internet to inform the netizens that their son, Anton Pippen who turned 33 had died.

The duo had a son together after getting married in 1987. It was at least one year after their marriage that they conceived their first child Anton Pippen. However, after three years of marriage, the duo decided to get a divorce for mutual reasons.

As we have already mentioned that she is a professional musician. Her talent landed her a role on the CW show called Dynasty. For two seasons, she played the role of the pianist. There she had the freedom to demonstrate how good of a fit she is, as a musician and as an actress as well.

How Did Their Son Die?

The son of Scottie Pippen and Karen McCollum had passed away in April. It came as a shock for many, especially Karen who was very close to their son. Pippen took to Twitter to reveal the news of his son’s death. In the post, he wrote that his son suffered from chronic asthma. However, he did not state or confirm whether it was asthma that was his cause of death.

He wrote in the post, “I’m heartbroken to share that yesterday, I said goodbye to my firstborn son Antron. The two of us shared a love for basketball and we had countless conversations about the game. Antron suffered from chronic asthma and if he hadn’t had it, I truly believe he would’ve made it to the NBA.”

Pippen further added, “He never let that get him down, though Antron stayed positive and worked hard, and I am so proud of the man that he became. Please keep his mom, Karen, and all of his family and friends in your thoughts and prayers. A kind heart and beautiful soul went way too soon. I love you, son, rest easy until we meet again.”

Who did Pippen marry after Karen McCollum?

As we have revealed earlier, Pippen and McCollum had gotten a divorce in 1990. After that, Pippen courted Larsa Younan. They met in Chicago five years after he had divorced McCollum. Together, they have four children, Scotty Jr., Preston, Justin, and Sophia Pippen. However, this couple also got a divorce in 2018.

The net worth of Pippen ranges between $20 – 50 million. As he has played many seasons, it is natural.

The Main Reason of Attraction for Physiotherapy Newton

Protection From 5G: The What, Why, and How!