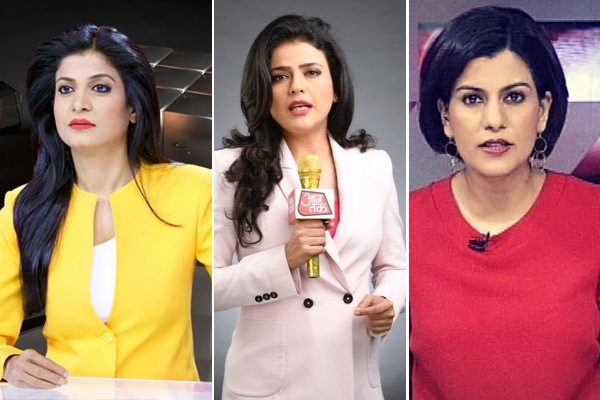 Similar to movies, television channels are becoming popular nowadays. The media is the fresh and hottest industry as of now. A large number of youngsters can start their career in this hot media industry. A lot of male and female anchors are starting their careers in this media and earning good money. Let us see some of the most beautiful and talented Female News Anchors of India in this article.

Who are the most glamorous Female News Anchors on Indian television? Have a look:

Chitra Tripathi is the glamorous news anchor working in India’s Number.1 news channel Aaj Tak. Her birthplace is Gorakhpur in Uttar Pradesh. Chitra is a popular script writer and journalist, and her past workplaces include ABP news, New 24, etc. She earned good recognition after working in ABP news. In this channel, she was hosting many shows. Some of them are 2019 Kaun Jeetega, Modi Ke 4 Saal, and Kaun Banega Mukhiyamantri.

Romana was born in 1987 at Meerut, Uttar Pradesh. She did her higher education at Meerut’s Sophia Girl High School. She graduated from the prestigious Aligarh Muslim University. Romana became popular in the media with her style of news delivery. She was working in Zee News and News 24. Now, she is working in ABP News.

Rubika Liyaqat became popular in a short period as an anchor. Her birthplace is Rajasthan. She became famous working in news channels like News 24 and Zee News. Now, she is currently working in ABP News Network. In this channel, she is hosting Prime Time Show “Master Stroke”.

Neha Batham is from Lucknow, Uttar Pradesh. She is popular for hosting news programs in a unique style. Neha was a journalist on Zee Business Channel. Now, she is working in Aaj Tak, after working in News 24. She is a producer of programs and one of them is “Ek Aur Ek Gyarah”.

Puja Bhardwaj is from Patna, Bihar, where she did her higher education. She moved to Mumbai to work with NDTV. Starting as a voiceover artist at the age of 14, she now works in NDTV India as a host.

Kadambini Sharma is a popular television anchor working in NDTV India. She was doing some popular programs. They are India 9 Baje and Prime Time. One of her special series named Mission 2014 made her popular among people. Coming to her education, she has done her graduation from the University of Delhi.

Palki is from Varanasi. She has been working in CNN-IBN for a longer time. Communication. She was doing even part-time jobs in Doordarshan and Hindustan Times. In 2007, she won the “Best News Reader” award.

Mitali Mukherjee is the prime time market news anchor working in CNBC-TV18. She is the news editor and covers market news. She is the producer and anchor for the weekend show “Classroom”. This program helps to create awareness among people about markets and equity shares. Mitali is the gold medalist in Television Journalism and BA Political Science.

A young and charming news anchor working in the News Channel CNBC-TV18 is Tanveer. She is an anchor, researcher, and analyst. She graduated from Jesus and Mary College, New Delhi. Gill did her MBA from Lal Bahadur Shastri Institute of Management, Delhi.

Ambika Anand was born on 15th September 1980. She is the editor-in-chief and anchor at NDTV Good Times. Ambika is the chief host of Band Baajaa Bride Season 2, I’m Too Sexy – Get the Look. She is the anchor of other shows. Some of them include The Big Fat Indian Wedding, I’m Too Sexy –All Access and Born in New Delhi, etc.

Sunetra Choudhury is an anchor in the Indian News Channel NDTV 24×7. Started her career in the Indian Express and became a deputy chief reporter there. She was working at Star News as a reporter in Hindi. She has been working on NDTV for many years.

A popular anchor working in Indian Business News Channel CNBC TV18 is Ayesha. She was working initially on this news channel. The anchor moved to the BBC World Service and MTV India, as a reporter and producer. She again moved back to CNBC TV18 in 2003, where she is currently working now.

Avantika Singh is a popular newsreader working in an English News Channel. She looks pretty and delivers the news in her modulations. Avantika highlights the main news with a different modulation, which is her unique talent. She is giving a new dimension to reading the news.

Rochelle Rao is from Chennai, and she has won the title of the Femina Miss India. She became popular as a professional Indian model. She was the anchor of the Indian Premier League (IPL) for the sixth season.

Nidhi Razdan started her career in 1999 as a news anchor, where she became a senior journalist. She was working in political, social, and economic stories. She was reporting brutal gang-rape in New Delhi, Conflict issues of Kashmir, etc. With her excellence towards work, she got the Ramnath Goenka Award for Excellence in Journalism.

She is a famous personality and a well-known face of CNBC. Shereen looks gorgeous and serves as the head of CNBC-TV18. She is the chief of the Delhi Bureau. The gorgeous lady started her career as a news researcher in Infotainment Television Production House. She is the producer of several shows. Some of them are “Line of Fire for Sab TV” and “We the People for Star TV”.

Harishree Mehta is an anchor working at NDTV. She has good knowledge of accounts, stock markets, etc, as she is a chartered accountant. One of the popular faces of Times Now is Harishree Mehta. She was coordinating some of the best shows in the Indian Business Television.

Shaili Chopra is an award-winning news anchor working in ET Now. Chopra has 12 years of experience in anchoring and reporting. She writes a golf column for the newspaper Tehelka. She was the anchor of the primetime shows.

These were the list of beautiful and talented Female News Anchors of India. All these top anchors are working on different news channels.

Most Beautiful and Intellectual Female IAS/IPS Officers In India

Suhana Khan shared a photo with a friend and said- ‘Miss you’, best friend ShanayaKapoor have such a reaction

Pfizer and BioNTech On Lead: Study Says Their Vaccine Prevents 90% of Infections