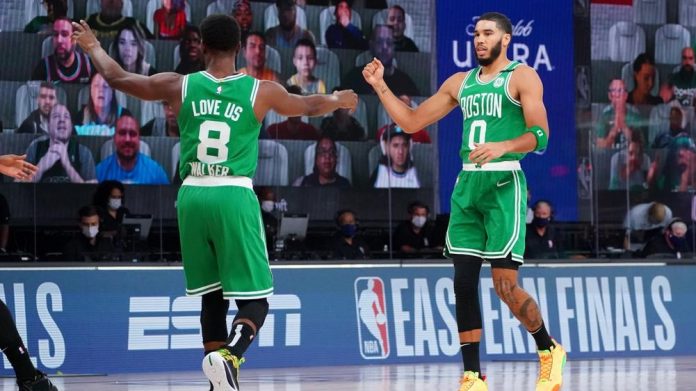 If you are even a casual NBA fan, you have to be stunned that the two preeminent Eastern Conference powerhouses, Toronto and Milwaukee, have both been eliminated from postseason contention before the conference final round.

The Raptors are the defending world champions but could not get past the surging Boston Celtics and were eliminated in seven games in the conference semifinals. The Milwaukee Bucks, featuring the league’s two-time Most Valuable Player, Giannis Antetokounmpo, proved to be no match for the lethal perimeter shooting Miami Heat, bowing in five games.

Neither the Celtics nor the Heat was expected to survive this long but here they are. Miami gutted out a 117-114 overtime victory in the opening game of their best of seven series and followed that with a 106-101 win to take a two-game lead.

However, the Celtics were not ready to let the series get out of control and rebounded with a sterling effort to claim a 117-106 Game 3 victory, cutting Miami’s series lead to 2-1 as they enter Game 4 on Wednesday night.

Boston has been notorious for getting big leads early only to watch the Heat melt it away like butter in a blast furnace. But this time Boston held on and sealed the deal courtesy of 20+ points from the talented quartet of Jaylen Brown, Jayson Tatum, Kemba Walker, and defensive wizard, Marcus Smart.

“There’s some great guys in that locker room,” Boston’s Jaylen Brown said. “A lot of emotion, a lot of passion, but we’re a family and we’re here for each other at the end of the day. We exemplified that when we came out together … we kept our will high and we persevered to win this game.”

Game 4 will be a test of wills as the Celtics look to even the series while the Heat will try desperately to put a chokehold on the Eastern Conference finals with a win and a 3-1 series advantage. If you like to put your money where your mouth is, make sure to check out Sportsbook Review. SBR offers live NBA Odds from online sportsbooks all over the world and features analysis from many of today’s top handicappers.

The Celtics welcomed back the oft-injured Gordon Hayward in Game 3 and he will be back in uniform on Wednesday night. The former All-Star logged 31 minutes, scoring six points, and collecting five rebounds after being sidelined for the last month with a sprained ankle. We look for the Celtics to take control of this series with Hayward coming off the bench and expect to see Boston win the next three contests and claim the Eastern Conference title in six games.

The LA Lakers are steamrolling through the playoffs, bouncing the Trail Blazers in five games followed by a dominating 4-1 series win over James Harden and the Houston Rockets. The Denver Nuggets are all that remains in the West but find themselves down 2-0 despite a hotly contested Game 2 in which Los Angeles had to rely on Anthony Davis to hit a three-point dagger with no time remaining to secure the 105-103 victory.

Lakers coach Frank Vogel on AD’s late-game heroics, “That’s a shot Kobe Bryant would hit,” Vogel said. “To me, AD coming off, just flying to the wing like that, catch-and-shoot with the biggest game on the line of our season, nothing but net, it’s a Mamba shot.”

The dynamic duo of Anthony Davis and LeBron James have been virtually unstoppable in the postseason. Many liken this waltz through the West as more of a coronation than a competition but once they get by the Nuggets, and we believe they will do exactly that in five games, then the competition becomes much stiffer with an Eastern Conference opponent in either Boston or Miami.

Boston has the depth and the seasoned youth to give the Lakers a problem while Miami can get white-hot from beyond the arc and simply not miss. However, the Heat can be streaky and any lapses will be fatal against the uber-talented Lakers. The Celtics are LA’s most daunting opponent and, in a few weeks, we will know just how this strange but fascinating 2020 NBA season shakes out!

How To Support To Fix QuickBooks Error Code 392

How is a Car Accident Attorney Helpful in Determining the Claim?