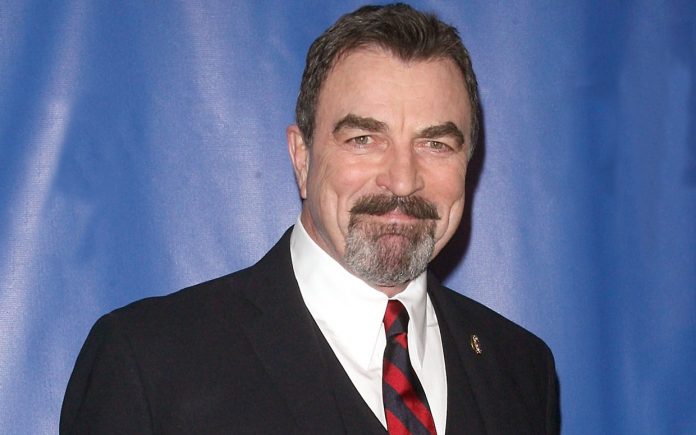 Read through the article to know more about Tom Selleck.

Who is Tom Selleck?

In the latter part of the article, we will discuss the personal life and professional life of Tom Selleck in detail.

When was Tom Selleck born?

The film producer and actor Tom Selleck was born on 29 January 1945. His birth took place in Detroit, Michigan in the United States of America. Currently, he is 75 years old, yet he is very good looking. Tom and his family spent some time in Detroit before moving to a different city.

Tom Selleck and his family moved to Sherman Oaks in California. He got his primary education from California.

Quick Facts About the Tom Selleck

Tom is the son of Maratha Selleck and Robert Dean Selleck. Tom’s father was a real estate investor and executive. On the other hand, his mother, Martha was a housewife. The actor comes from a big family, he has three siblings.

Tom has an elder brother Robert and a younger brother Daniel. His brothers were born in 1944 and 1950 respectively. In addition to brothers, he also has a sister Maratha. The date of birth of his sister, Maratha is not known. In an interview, Tom spoke about his parents and praised them for their hard work. He went on to speak about his upbringing and life with siblings.

The actor and the film producer Tom Selleck is an attractive person. Tom has sharp and neat features that reflect his confidence. In addition to this, he stands tall and healthy.

As mentioned above Tom Selleck’s parents were living in Michigan at the time of his birth. His father, Robert, is of English ancestry and a hint of German. But his mother, Martha, is a full English descendent. So, this makes his ancestry English, and he is American by nationality.

Even more Tom Selleck from the paternal side he is related to English colonists. The name of the colonist is David Selleck, who moved to Massachusetts from England in 1633.

Coming to Tom’s education, he went to Grant High school. Later on, he went to Los Angeles Valley College by living at home. Tom decided to live at home to save money. Then with the help of a basketball scholarship, he was going to the University of Southern California.

While studying, the drama teacher suggested acting and motivated him to pursue it. He learned acting from Beverly Hill Playhouse rest is history.

Tom was a young man pursuing his dreams and learning. But on receiving a call from the government during the Vietnam war, he joined the National Guard. He served in California National Guard for six years in the 160th Infantry Regiment.

Career of Tom Selleck in movies and on television

As stated earlier, he began his career as a National Guard in California. But he changed his career to acting after six years of service. He made his debut in television on – The dating game during his college senior year. Late on, he was part of an advertisement for Pepsi and Coca Cola.

In the initial stages of his career, he was part of small movies like Coma and The seven minutes. In addition to this, he was also part of a mini television series. He modeled for many commercials over the years like Chaz Cologne, Close-up, and Right Guard.

Apart from television series, he has also famous on the big screen. His popular movies are three men and a Baby, its sequel, and Down Under. Other popular films of Tom are in and out, the love letter, and Mr. Baseball. In his career as an actor, Tom has done well.

Who is Tom Selleck married too?

Earlier, Tom Selleck was married to a model. The name of the model is Jacquelyn Ray; they were in wedlock for 12 years. Later on, Tom married Jilly Joan Mack. Jilly is a dancer in the musicals. He plays a dancer in the musicals Cats. His love interest with Jilly began soon after the divorce from Jacquelyn. Tam Selleck and Jilly tied the knot in the year 1987, which was a huge shock.

Currently, Tom is living happily with Jilly and his daughter. Finally, the couple has two children, a son, and a daughter. He did not have any children with Jacquelyn, but they adopted a son Kevin. On the other hand, Tom has a daughter with Jilly. The name of the daughter is Hannah, who is 29 years old.

Tom Selleck is a famous actor in television series as well as movies. In his career, he played outstanding roles. The estimation of Tom Selleck Net Worth is nearly $45 million American dollars.

Tom Selleck is an actor and a film producer. He lives with his wife Jilly and works in the United States of America. He is one of the highest-paid actors in the industry.

Fanning the Flames: Steps to Becoming a Firefighter

Where Can Students Find Someone to Do Their Essays

Building a Nursery from the Ground Up, Starting with a Davinci Changing Table

Rich Manley is an All Rounder Since his Childhood