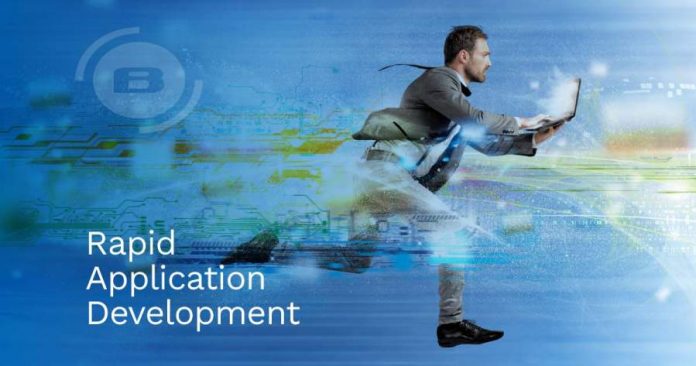 With the world advancing at a fast pace, the needs of customers are ever-changing. In such a scenario, agile software development techniques, such as Rapid Application Development (RAD) are appreciated over traditional approaches that follow a rigid structure and have less scope for incorporating changes.

Rapid Application Development is a software development approach that prioritizes the prototype release and development takes place in an iterative manner. Each iteration readily incorporates the feedback and suggestions that are feasible in the next prototype of the software to be deployed.

Unlike, traditional Waterfall model, RAD is always open to adapt and integrate user demand and therefore, is a more suitable model for developing software serving solutions to present-day problems.

If you haven’t switched to RAD yet, the top 5 benefits mentioned down here will surely compel you to think about changing your approach to software development.

The Rapid Application Development approach is more flexible in adapting to changes. There is always a scope to add or delete any feature from the software, which is based on the feedback received from the end-users

Moreover, a project following the RAD approach warmly welcomes the newly introduced technologies, while on the other hand, for models like Waterfall, it will be very time-consuming and cost-effective. As to incorporate the new technology, the whole process will be required to be revised and all the steps achieved have to be revisited with a new plan.

2. Improvement at Each Iteration

In the Waterfall model, the whole process is defined first, each step has predefined work and cannot be revised, and there is little chance to overcome backlogs. While, in Rapid Application development, prototypes of software are deployed, feedbacks from users are received, code from the previous prototype is used, suggested changes are incorporated, and the software is again made ready to be deployed to again receive suggestions from the customers, and the same cycle follows. Therefore, with each iteration, the improvement of the software takes place and the product keeps evolving in a better manner until it’s ready for the final release.

In RAD, versions of the software are released faster as compared to traditional methods. As the new version release feels like another iteration where the new functionalities are added to the existing version, goes for testing and the software is ready to be deployed, unlike other approaches where the whole plan will be defined to make new changes, which usually takes months before release.

As the Rapid Application Development method prioritizes the release of prototype models, the risks are identified in the early phase of development and worked upon as the development advances. Risks may also emerge throughout development and can be handled right away. Other models put risks on hold until the ultimate version is released, which exposes stakeholders to numerous dangers that they were not aware of at the outset.

The major flex of RAD is the adoption of the iterative model, which enables the deployment of prototypes. After the release of every prototype, feedback is taken from customers and end-users, and the next iteration takes place accordingly. All this process involves high-level collaboration with customers, thereby helping in understanding their needs and fallback of the prototype, which are overcome in the next iteration. The whole coordination of stakeholders with customers leads to their enhanced satisfaction with the deployment of the product that fulfills almost all of their desires.

5 Best Practices of Software Engineering in 2021

Why You Need a Driving Route Tracking Software

How to Surprise Your Boyfriend

A Know-it-all On Soap2day And Soap2day Virus: How Far Removed Is...

5 Efficient Tools That Will Help You Save Time in Car...