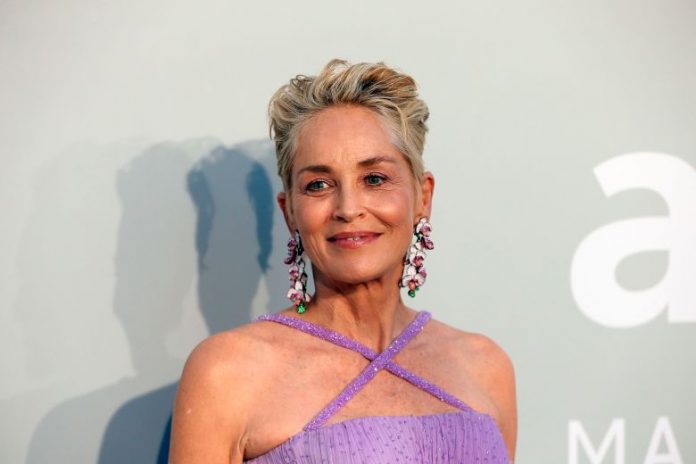 Sharon Stone has rocked a black swimsuit. The pictures have revealed that the 63 years old actress has finally started embracing the pop trends. Hitting the beach and unwinding there has always been one of the major trends that many follow. Despite age and generation, this is the to-do list for many. This time Sharon Stone participated in it.

Sharon Stone And The Mesmerizing View:

The 63 years old Sharon Stone on Sunday treated herself to some vitamin D. Moreover, two fans have taken two sizzling snaps of her bathing in the sun in a rather daring black swimsuit.

The actress herself took to her personal Instagram account to post a picture of hers. She donned the black swimsuit and lay on the beach soaking the sun. Furthermore, the rocky seafront in the picture only enhanced her beauty. She captioned the sultry picture with the “self-care matters.”

The picture soon earned multiple raves from many fashion moguls. Naomi Campbell, Vera Wang is to name a few. Joely Fisher, however, commented, “I’ll have what you’re having”. But this was not all. A second shot that one took from the above shows the staff staring at the camera.

She models for her picture. In it, she is showing off the plunging, halter-style swimsuit. Moreover, she paired her outfit with a ruched-waist look. Moreover, she added aviator sunglasses. What is more interesting is the blond pixie with beachy waves that piqued her look.

She captioned the second picture with “Body, mind, and spirit.” In this picture, Jaimee Lee Curtis commented, “This is so EPIC”.

How Old Is Sharon Stone?

Sharon Vonne Stone was born in Meadville, Pennsylvania to Dorothy Marie and Joseph William Stone II on March 10, 1958. Hence, as of now, she is 63 years old. Stone’s life is pretty much open to the public eye. The media had revealed that Sharon Stone had an IQ of 158. According to some sources, she had the brain of a “gifted child”.

More about her childhood is that she has three siblings. They are Michael, Kelly, and Patrick. Her ancestry connects her with Irish heritage. In one of the interviews with Conan O’Brien, she stated that her Irish ancestors arrived in the United States during the Great Famine. Since then, her family started living here.

How Tall Is Sharon Stone?

When it comes to the physical features of Sharon Stone, God has gifted her generously. She is, what many would agree is a perfect example of Aphrodite. Because of her goddess-esque feature, she has excelled in both modeling and acting. Her height is 5 feet 8 inches. In other words, she is 172.7cm tall. But when it comes to her body measurement, one can say that it is her appearance that captures the heart of many. She weighs around 57 kg or 125 lbs. Moreover, her bra size is 36B. Furthermore, her shoe size is 9. And her body proportion is 36-28-34.

Where Does Sharon Stone Live?

Sharon Stone has a link with Irish ancestry. She claims that her ancestors came to America during the great famine. Stone was born in Pennsylvania in 1958. She has done her schooling there. However, at some point in her life, she moved to Europe. There Stone lived in Milan and then in Paris where she tried her hand at modeling.  Moreover, she ventured into making a perfect place she can call home. She moved to Beverly Hills. Sources revealed that she bought it in 1993. In an interview, she revealed, “All of a sudden, crazy stalkers were trying to get into my [old] house…..I had to find a new home that had proper gates.” She ended up staying in the LA house.

Sharon Stone is an American-based former model, actress, and producer. The media dubbed her as the femme fatal in the entertainment industry. Recently, she released two pictures wearing a black swimsuit.

What to Give as a Present to a Gamer Girl?

How To Get Started With Your Commercial Construction Project?

How To Pick The Best Boston Limousine Service?