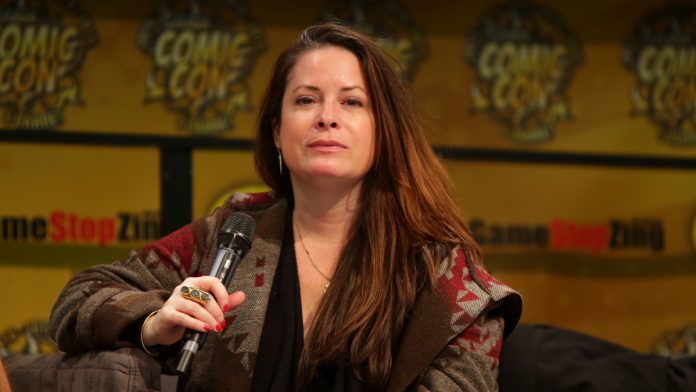 Holly Marie Combs is one of the famous American TV and Film actress, and a filmmaker. She is quite famous for her extraordinary performance in “Picket fences”, and “Charmed”. Indeed her strong, bold, and beautiful personality attracted fans worldwide.

Moreover, she is a certified scuba diver, a filmmaker, and has worked tremendously good in her films. Her hard work and skills created her own name in the industry.

In today’s article, we are going to talk about the very talented and hot woman Holly Marie Combs.

Who is Holly Marie Combs?

Holly Marie Combs is a talented American film and TV actress. She has amazed the audience with her brilliant performance in ‘Picket Fences’ and ‘Charmed’.

She was born on 3rd December in 1973 in California, USA. Her mother gave her birth when she was 16 years old while her father was 17. Due to the young age, her parents called off the relationship.

Combs shifted to New York with her mother and spend most of her developing years here. You will be surprised to know that she was a trained and certified scuba diver from the age of 13.

Holly Marie Combs married to Bryan Travis Smith but the couple parted their ways in 1997. In 2004, she married David Donoho and has 3 kids. Later, in 2011, the couple filed a divorce case. In 2017 she surprised her fans by announcing her engagement with Mike on Instagram.

Holly Marie Combs started her career at the tender age of 14. She did her debut in “Sweet Hearts Dance.”  At the age of 7, she started working in print ads and commercials. During, this was the time when she discovered her desire to be an actress.

Besides, she was seen in “Born on the fourth of July” opposite Tom cruise.
Later, we saw her performing in ‘New York Stories’, ‘Simple Men’ and ‘Chain of Desire’. She has also done a horror drama “Sins of silence” and was spotted in some television films like ‘Love’s Deadly Triangle: The Texas Cadet Murder’.

Holly Marie Combs and Shannen Doherty started their own reality show, ‘Off the Map with Shannen & Holly’. In this reality show, they travelled across the different South-eastern United States.

Holly Marie Combs won the Young Artist Award for her spectacular performance in ‘Picket Fences’. As well as she won top TV witches for TV series for her TV series ‘Charmed.’

Holly Marie got featured in print advertisements for breast cancer awareness. Moreover, this campaign was sponsored by Susan G Komen Breast Cancer Foundation and Ford Motor Company. She started her career at 7 and is still working hard to get better and better, she is a true star and an inspiration.

Is the Best Car Amplifier Best for You?

7 Factors to Consider When Hiring a Residential Painting Company

How to Use SEO for Brand Building